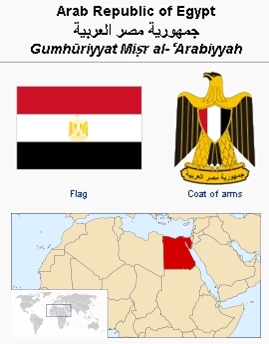 Egypt, in North Africa, covers an area of 1,002,450 square kilometers (387,048 sq mi). Egypt's population of approximately 75.4 million people makes it one of the most populous countries in Africa and the Middle East. Most people live near the Nile River, where the only arable agricultural land is found. About half of Egypt's residents live in urban areas, with the majority spread across the densely-populated centers of greater Cairo, Alexandria and other major cities in the Nile Delta.

Egyptians are the largest ethnic group in Egypt at 98% of the total population. Ethnic minorities include the Bedouin Arab tribes living in the eastern deserts and the Sinai Peninsula, the Berber-speaking Siwis (Amazigh) of the Siwa Oasis, and the ancient Nubian communities clustered along the Nile. The vast majority of Egypt's population is Muslim, with Muslims comprising about 90% of the population. Almost all of Egypt's Muslims are Sunnis. A significant number of Muslim Egyptians also follow native Sufi orders, and there is a minority of Shi'a.

Most of the non-Muslims in Egypt are Christians. Christians represent around 10% of the population and are the largest Christian community in the Middle East. Around 90% of Christians in Egypt belong to the native Coptic Orthodox Church of Alexandria, established in the 1st century. Other native Egyptian Christians are adherents of the Coptic Catholic Church, the Greek Orthodox Church of Alexandria, the Coptic Evangelical Church and various Coptic Protestant denominations.

Beginning in 1972 with the placement of teachers with the Coptic Evangelical (Presbyterian) church, Mennonites have become increasingly involved with the Egyptian churches. Emphasis is given to placement of health care workers (23 in 1985) and teachers of English, at both elementary and adult levels, in the medical and educational institutions of the Coptic Evangelical, Coptic Orthodox, Anglican, and Catholic churches. ("Coptic" simply means "Egyptian".) Mennonites, through Mennonite Central Committee, are also involved in promoting and funding literacy programs, health clinics, and land reclamation projects, and in encouraging and assisting in the renewal movement within the Coptic Orthodox community. Mennonites are not interested in beginning yet another western church in a country where Islam comprises 90% of the population, but in assisting the indigenous churches carry out their agenda. More recently, MCC has also worked with Sudanese refugees.