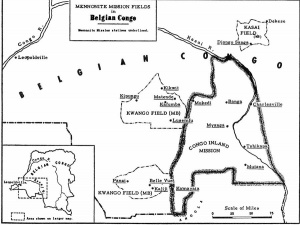 Congo Inland Mission was organized at Meadows, Illinois on 22 March 1911, by the Defenseless Mennonites (later Evangelical Mennonite Church) and the Central Conference Mennonite Church. The following members, consisting of four from each conference, served on the organizing committee: Valentine Strubhar, Christian R. Egle, Joseph H. King, Peter Schantz, Benjamin Rupp, Aaron Augspurger, J. K. Gerig, and D. N. Claudon. The official name of this committee was "The United Mennonite Board of Missions," but on 23 January 1912, the name was changed to "The Congo Inland Mission" and incorporated as such.

In 1911 L. B. Haigh and wife were sent to the Congo to investigate the field which had been recommended to them by the Presbyterian missionaries in the Congo, from whom they received much help. The following year the board decided to begin work in this field along the Kasai River. Alvin James Stephenson, a former Baptist missionary who had served two terms in the Congo, was sent to help the Haighs start the work. Before a year of service, he died on the field on 16 February 1913.

After preliminary itinerating work, the village of Kalamba was made the center of missionary activities and Djoka Punda, later named Charlesville, the transport station. On 24 January 1913, the mission force was strengthened with the arrival of Aaron and Ernestina Janzen, Sarah Kroeker, and Walter Scott Herr. In January 1915 the first two converts of the Congo Inland Mission were baptized at Djoka Punda and the first native church organized with a membership of 12, of whom 10 came from the near by mission at Luebo. Medical work was carried on from the beginning, Oscar Anderson being the first physician on the field.

Outstations were continually being opened and in 1917 a training school was established at Djoka Punda to train natives for this work. In 1918 a girls' home was established both at Djoka Punda and Kalamba. A new mission station at Nyanga was opened in 1921. In May 1923 another station was opened at Mukedi. By the end of 1923 the church membership at the four stations was 200, by 1932 there were 1,200 members, and by 1936 the number of baptized Christians on the Congo Inland Mission field was 3,145. Between 1911 and 1936, 89 missionaries served in this work.

The mission carries on evangelistic, industrial, educational, and medical work. Each of the four stations had a boys' and a girls' school and natives trained to teach in the outstations. One of the most important activities was the translation of the New Testament into the Kipenda language. This task was done at the Mukedi station and required nine years to complete.

The Evangelical Mennonite Brethren Church (now the Fellowship of Evangelical Bible Churches) joined the Congo Inland Mission in 1938, and the General Conference Mennonite Church joined in 1943.

In 1972 the name was changed to Africa Inter-Mennonite Mission (AIMM) to reflect a vision to expand the mission work beyond the borders of Congo. In 1973, an exploratory ministry began in Lesotho. Work with African Initiated Churches began in Botswana in 1975 and the Transkei in South Africa in 1982, while the planting of Mennonite churches began in Burkina Faso in 1978.

In 2011, the Africa Inter-Mennonite Mission had the following partners: