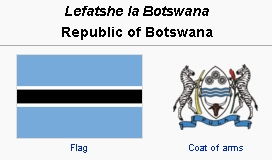 Botswana was formerly the British protectorate of Bechuanaland until it gained independence from Great Britain on 30 September 1966. A Mennonite presence began soon after, with the arrival of Mennonite Central Committee (MCC) workers in 1968. Initially emphasis was placed on secondary education and teacher training. The MCC program expanded into agriculture and the training of skilled laborers, e.g., mechanics and bricklayers. Later it moved into the area of community development. As MCC workers became more involved in the community they became increasingly aware of African-Initiated Churches (also known as African Independent Churches). Africa Inter-Mennonite Mission (AIMM) began work with these churches in 1975. In 1981 the administration of MCC and AIMM programs was united under Mennonite Ministries in Botswana.

In the following years, Mennonite Ministries had personnel working in the areas of Bible teaching among African-Initiated Churches, community development, education, youth ministry, friendship evangelism, teaching and issues related to families, and health, particularly in AIDS education and counseling. Beginning in 1975, six Mennonite denominations had sent workers to Botswana.

Between 2006 and 2012 the following Anabaptist group was active in Botswana: