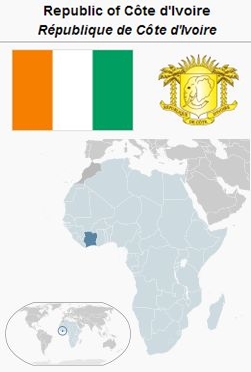 The Republic of Côte d'Ivoire, commonly known in English as Ivory Coast, is a country in West Africa. and borders the countries of Liberia, Guinea, Mali, Burkina Faso and Ghana; its southern boundary is along the Gulf of Guinea. It has an area of 322,462 km2 (124,502 sq mi) and in 2009 the country's population was estimated to be 20,617,068.

The Eglise Protestante Anabaptiste L'Institution Chrétienne (Protestant Anabaptist Church of Ivory Coast) was founded in 1994 with 200 members in 3 congregations by Raymond Affouka Eba, formerly a leader of the country's leading Baptist independent group. He gathered a group of believers who tried to live out a theology that included adult baptism, nonviolence, justice and the importance of community.

Eba knew a little about the Anabaptists of the 16th century, but did not know any modern Anabaptists. A year after the Protestant Anabaptist Church of Ivory Coast was founded, Eba met James Krabill, a Mennonite mission worker who served two decades in Ivory Coast. Krabill helped Eba learn more about Anabaptist literature and current leaders, connecting with Mennonite World Conference and the global Anabaptist community for resourcing and relationships.

Between 1994 and 2012 the following Anabaptist group was active in Côte d'Ivoire:

"Background Material on Mennonite, Brethren in Christ and Related Churches in Africa and the Countries where they are Found." 2001? Web. 17 April 2011. http://www.mwc-cmm.org/MWC/Material/WFSbackground.pdf.