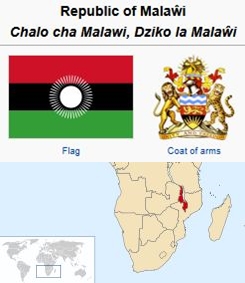 The Republic of Malawi is located in southeast Africa and was formerly known as Nyasaland. It is bordered by Zambia to the northwest, Tanzania to the northeast, and Mozambique on the east, south and west. The country is separated from Tanzania and Mozambique by Lake Malawi. Its size is 118,484 km2 (45,747 sq mi) with an estimated population in 2009 of 15,028,757. Its capital is Lilongwe, the second largest city is Blantyre and the third largest city is Mzuzu. The country is also nicknamed, "The Warm Heart of Africa."

Malawi was first settled during the 10th century and was colonized by the British, who ruled the country from 1891 until 1964, when it gained independence.

Malawi's population is made up of the Chewa, Nyanja, Tumbuka, Yao, Lomwe, Sena, Tonga, Ngoni and Ngonde native ethnic groups, as well as populations of Asians and Europeans. Major languages include Chichewa, an official language spoken by over 57% of the population, Chinyanja (12.8%), Chiyao (10.1%) and Chitumbuka (9.5%).

According to the 1998 census, 79.9% of the population is Christian, with the Roman Catholic Church and the Church of Central Africa, Presbyterian making up the largest Christian groups. There are also smaller numbers of Anglicans, Baptists, Evangelicals and Seventh-day Adventists. 12.8% of the population is Muslim, with most of the Muslim population being Sunni. Other religious groups within the country comprise around 3% of the population, including Jews, Rastafarians, Hindus and Baha'is. Atheists make up around 4% of the population, although this number includes people who practice traditional African religions.

In 2020 the following Anabaptist denominations operated in Malawi:

"Background Material on Mennonite, Brethren in Christ and Related Churches in Africa and the Countries where they are Found." 2001? Web. 17 April 2011. [broken link].