Kikwit (Democratic Republic of the Congo) 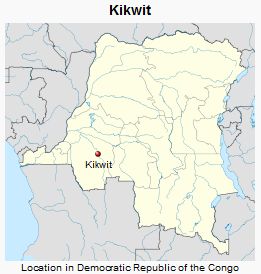 A river port on the farthest navigable point inland on the Kwilu River, Kikwit (in Kwilu Province; coordinates: -5.041246,18.815103) early became a center of commercial activity in the Democratic Republic of the Congo during the colonial period, when the area was known as the Belgian Congo. Its location some 390 air miles (625 km.) east of Kinshasa amidst a productive agricultural area has greatly enhanced its growth. Its population in 1986 exceeded 350,000 people.  On 17 May 1995, its population was estimated to be around 1 million people.

Mennonite missionary presence and work in the area dates to the 1920s when, after serving two terms with the Congo Inland Mission, Aaron and Ernestina Janzen, a Mennonite Brethren missionary couple, began an independent work in the Kafumba area some 35 mi. (56 km.) south of Kikwit along the Kwilu River. It was after World War II that the Mennonite Brethren Board of Missions officially picked up sponsorship of the Janzens' work.

Since the 1960s, the Mennonite Central Committee has provided funding and occasional expatriate personnel for a development program which has at different times featured cattle, poultry, a feed mill, and a peanut oil processing plant. It was also at Kikwit that a Habitat for Humanity housing project, for which the Africa Inter-Mennonite Mission provided expatriate administrative personnel, was begun in 1984.