From GAMEO
Revision as of 15:56, 20 April 2020 by SamSteiner (talk | contribs) (→‎Former Anabaptist / Mennonite Congregations in Abbotsford)
(diff) ← Older revision | Latest revision (diff) | Newer revision → (diff)
Jump to navigation Jump to search
A checked version of this page, approved on 20 April 2020, was based on this revision. 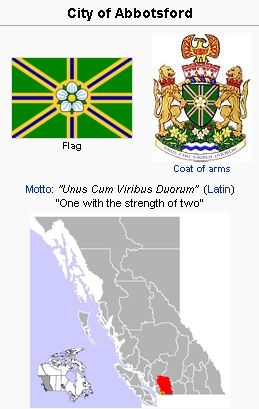 Abbotsford, British Columbia, which describes itself as the city in the country, is located in the center of the fertile Fraser River valley, 2.5 miles (4 km) north of the United States boundary and about 40 miles (65 km) east of Vancouver, along the Trans-Canada highway (coordinates: 49° 3′ 16.6″ N, 122° 19′ 40.8″ W). Langley is to the west, Chilliwack is to the east, and Mission is to the north. According to the 2006 Census Canada data, the area of Abbotsford has a population of 159,020. The city is the third most ethnically diverse city in Canada, after Toronto and Vancouver, with South Asians comprising nearly 19% of the population in 2006.

It was John Cunningham Maclure (1831-1907), a British Royal Engineer sent out to British Columbia as part of a survey team, who is credited with laying out the initial 160-acre plot that was to become Abbotsford. The village of Abbotsford was incorporated in February 1924. Following a 1993 referendum, Matsqui (including the area known as Clearbrook, incorporated in 1892) and Abbotsford were officially amalgamated on 1 January 1995, as the City of Abbotsford.

The first Mennonite settlers arrived in the Clearbrook area, sometimes referred to as Poverty Flats, in 1931 to locate on a plot of land that had been reserved for them by the Matsqui Municipality. Approximately a year later, on 1 May 1932, South Abbotsford Mennonite Brethren (MB) Church was organized with Abram Rempel as the leader, Cornelius Enns as his assistant and Isaak Sawatzky as secretary.  The first United Mennonite church (West Abbotsford Mennonite Church) was organized in November 1936 with Peter P. Epp as the founding elder.

Mennonites have become well known for their involvement in the life of the community, with representatives on both the local school board and civic government.  In 2008 the Member of Parliament for Abbotsford is a member of a local Mennonite Brethren congregation. Certainly, the people of the Fraser Valley have been enriched by Mennonite music making with well-known groups as the Pacific Mennonite Children’s Choir, West Coast Mennonite Chamber Choir, Valley Festival Singers and the often acclaimed MEI choirs and bands. Prominent Mennonite musicians include Rudy Baerg, Tony Funk, Calvin Dyck, Holda Fast Redekop, Betty Suderman, Larry Nickel and Wes Janzen.