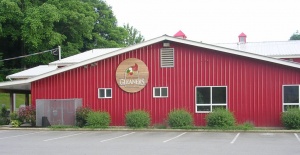 Fraser Valley Gleaners is a charity whose purpose is to package dried soup mixes and apple snacks “in the name of Christ” for distribution to countries that have food deficits. It was established in 1999, as a registered British Columbia Society. The Gleaners draw upon a Biblically inspired vision where farmers left surplus foods un-harvested for the benefit of impoverished people. The Abbotsford plant is modeled after the Okanagan Gleaners, which turns surplus fruits and vegetables into dehydrated meals.

The affairs of the Society are directed by a Board of Directors, elected at the annual general meeting. Volunteers are essential to the Society, contributing 45,000 hours in 2009. Mennonites from the Fraser Valley are prominently represented among the volunteers and donors, but not exclusively so. The Gleaners is exemplary in modeling an efficient production model, in which only 4% of donations are used for administrative purposes.

The Abbotsford Gleaners receive surplus food from area farmers, warehouse and greenhouse businesses. Donated produce is hygienically prepared, dehydrated and frozen. An assortment of dried vegetables are then mixed and sealed in convenient serving-sized packages, with simple instructions for meal preparation written on each container.

In May 2001 Fraser Valley Gleaners entered into a partnership with Mennonite Central Committee British Columbia (MCCBC), as a result of which the Society operates a modern facility on land owned by MCCBC. In return MCC receives and distributes a portion of the final product.

In 2009 Fraser Valley Gleaners processed 812 tons of raw food, resulting in 9.5 million food servings, which was then distributed to some 20 countries, including Kenya, Haiti and Moldova. All distribution is left to agencies or individuals who are involved in overseas development or mission work, and have a proven track record together with the capacity to cover the costs of transportation to destination.