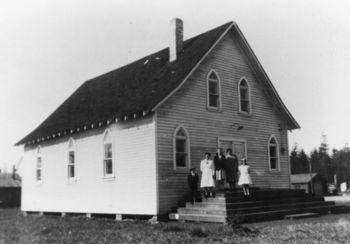 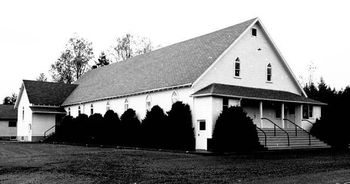 The first Mennonites settled in the Abbotsford, British Columbia area in 1930. Many of them settled on land between Huntingdon Road and the United States border that had been logged five years earlier. The area's 20, 30, and 40-acre lots of stump-land were very fertile. The Mennonite families worshiped in homes and when the Mennonite Brethren families organized the Abbotsford Mennonite Brethren Church (now South Abbotsford Church) in May 1932, some Mennonite families that were not Mennonite Brethren also chose to attend. Others chose instead to continue meeting in the homes of the families of Nicolai N. Dyck, Erdmund Kroeker, John Kehler, Jakob Sawatzky, Jacob and Henry Kroeker, Cornelius Tilitzky, and Theodor Lange. Ministers from the Coghlan area (Aldergrove), namely, Heinrich H. Dueck, Aron Jantzen, and Jacob J. Baerg, took turns cycling eight to ten miles to Abbotsford to conduct worship services.

The congregation formally organized on 15 November 1936 and was initially called Abbotsford Mennonitengemeinde (Abbotsford Mennonite Church). The first congregational chairman was Cornelius G. Tilitzky. Soon after, the name was changed to the United Mennonite Church of Abbotsford when it joined the Conference of United Mennonite Churches of British Columbia, becoming the first congregation of that conference in the Abbotsford-Matsqui region with a membership of 45. Peter P. Epp, a retired minister from Manitoba, was asked to serve as the congregation's first pastor. The municipality donated land on the corner of King and Townline Roads on which they built their first structure out of lumber from the dismantled Mill Lake Lumber Mill. Construction of a church building measuring 24 by 40 feet began in the fall of 1937.

Dramatic growth occurred while Heinrich M. Epp (1946-1958) was congregational leader and later elder, beginning in 1948. A second sanctuary was built in 1946 measuring 40 by 60 feet. In 1949 it was extended to 40 by 100 feet to accommodate the influx of post-World War II refugees and refugees from Europe, Paraguay, and Mexico.

The resulting so-called "long church" seating 600 was overflowing by 1952 with a membership of 430. To relieve their growing attendance, Peardonville Mennonite Church (1952) and Clearbrook Mennonite Church (1953) were established as daughter congregations, both of which later secured their own autonomy. The congregation was also involved with the Prairie Chapel outreach. In 1950, the church changed its name to West Abbotsford Mennonite Church (WAMC).

In January 1951 the church was accepted as a member of the Mennonite Educational Society that operated the high school, Mennonite Educational Institute. In that same year the church voted 97 to 20 in favor of women attending and voting at congregational meetings. In 1958 the church purchased property to establish the Ootsa Lake Bible Camp, 72 kilometers (45 miles) south of Burns Lake and members of the congregation, mostly young adults, volunteered their time to construct, manage, and staff the camp for a number of years.

During Peter J. Froese’s (1958-1967) term as pastor, language during worship became a concern. English was gradually introduced, first into the Sunday school program and then into evening services. In 1960 there were 213 German students and 52 English students. Menno Epp, son of H. M. Epp, delivering the first English sermon on 31 March 1963. A group of post-war immigrants desired to retain the German language during worship and requested assistance from West Abbotsford in establishing a new congregation. The request was granted, and Eben-Ezer Mennonite Church was dedicated on 14 July 1963.

A dual worship service model, accommodating both German- and English-speaking members, was implemented while Peter Harms (1968-1971) was pastor, beginning in 1968. Dietrich Rempel (1972-1981) became pastor in 1972 and introduced female deaconesses. During his tenure a new sanctuary was built in 1975-76 and dedicated on 27 June 1976. Charismatic issues affected the church as they did throughout the Fraser Valley, and some members left to join more charismatic congregations. Membership stood at 242 in 1980.

Paul Boschman, long-time missionary, came in 1983. It was an era of consolidation and even saw the advent of a revised constitution. Tippytoes Preschool, an outreach into the community, was begun in 1989. Dave Friesen (1990-1996) presided over an enlarged staff and Jake Thielmann (1998-2000) followed during a time when the church struggled with the issue of whether or not to divide into two services based on style of worship.

By 2000 membership had dropped to 120 when Karen Heidebrecht Thiessen became West Abbotsford’s first female leading minister. West Abbotsford had long ministered to the men in the Kinghaven Treatment Centre (for those struggling with drug and/or alcohol addictions) located next door on the campus formerly used by Bethel Bible Institute. In fact, a founding member of the Kinghaven society was West Abbotsford member George Schmidt. During the Thiessen era the congregation began to intentionally minister to the Kinghaven men.

West Abbotsford grew from a humble beginning of 45 founding members to a height of 432 members but declined to a low of 120. Many missionaries, church workers across North America, and Mennonite Central Committee workers have come from West Abbotsford. WAMC has struggled with its affiliations with Mennonite conferences. They left the BC Conference of Mennonites in 1953 but rejoined in 1957. In 2006 they became an Area Conference Only Member and left Mennonite Church Canada. Congregational polity changed from a leading minister in charge with a council of other ministers and deacons to an executive committee composed of lay leaders and pastoral staff; it changed from having many committees to having few; from strictly German to strictly English; from being known for its music and choirs to having a worship team and no choir and singing contemporary choruses.

In fall 2007 the congregation met over several months to review the church's vision statement and ministry objectives. While ministry opportunities were numerous, the congregation lacked the number of people and resources needed to meet those ministry needs. Discussions began with Wellspring Christian Fellowship about a possible merger, and in the end the membership of both West Abbotsford and Wellspring congregations voted overwhelmingly in favor of forming a new congregation. In September 2008 the congregations began worshiping together and in November they chose the name Level Ground Mennonite Church, signifying the concept that the ground is level (all are equal) at the foot of the cross of Jesus. A charter service for the new congregation was held on 25 January 2009 with 172 charter members.

Churches in Profile. Clearbrook, BC: Conference of Mennonites in British Columbia, 1978: 104-108.

Klassen, A. J., ed. The Church in the Heart of the Valley. Abbotsford, BC: Matsqui-Abbotsford Ministerial Association, 1992.

Textual records at Mennonite Heritage Centre, Winnipeg, MB and at the Mennonite Historical Society of British Columbia, Abbotsford, BC.

Address: 31216 King Rd., Abbotsford BC V2T 6C2; the church is located at King and Townline Roads 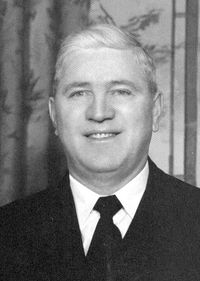