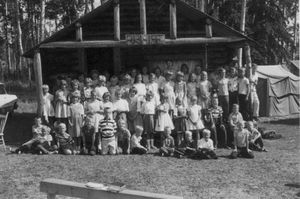 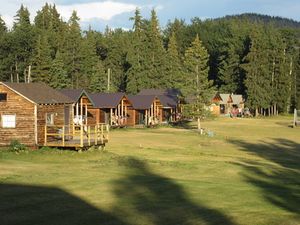 Ootsa Lake Bible Camp, 40 kilometers from Burns Lake, British Columbia, is situated on the shores of Ootsa Lake. To provide housing for his workers, Peter Funk, of West Abbotsford Mennonite Church, purchased five acres in 1952 on what would become the shoreline of a lake created to generate electricity for the Alcan Aluminum smelter in Kitimat. Funk was contracted to clear land in the valley prior to flooding. In 1955, a group of West Abbotsford youth held Vacation Bible School sessions on the Funk property for children who had no opportunities to attend Sunday school. Two of Funk’s laborers, Abe Buhler and Jack Nickel, developed a vision for a summer camp, and with West Abbotsford’s support and Peter Funk’s agreement for them to use his property, Ootsa Lake Bible Camp became a reality in 1956. Dave Wiebe and Abe Buhler provided the spiritual leadership that first year.

Two years later, Peter Funk sold the property to West Abbotsford Mennonite Church for $286, thus giving birth to an outreach program that inspired and shaped the lives of West Abbotsford youth for many years to come. The Camp fulfilled two goals of the West Abbotsford youth leadership: to provide opportunities for inviting children to faith, and to give West Abbotsford youth an avenue of service. Early challenges included local suspicions, open-range cattle, and bears. In 1959, the first campers’ cabin was built on the site, and the following years witnessed many additions and improvements, primarily possible because of volunteer labor and donated materials.

In the early years, camping season consisted of two weeks for children ages 8 to 11 and 12 to 14. Earliest records indicate 83 campers in 1962 and operating expenses of approximately $1,500. Initially, campers came from the Burns Lake region and from the Camp’s immediate vicinity, and originated from as many as eleven different church affiliations. By 1990, the camping season consisted of six weeks for 214 campers ages 8 to 16, 83 of whom had no church affiliation, and who came from as far away as Kitimat, Vanderhoof, and Houston. By 1970, local youth and other church groups were renting the Camp on a regular basis for spring and fall retreats.

In 1960, staff consisted of about 12 volunteers from West Abbotsford Mennonite Church, and continued to be recruited primarily from West Abbotsford during the camp’s formative years. In time an increasing number of northern residents filled the staffing needs. By the mid-1970s, names of former campers begin appearing on staff lists. In addition, active recruiting in several Bible schools took place, with modest scholarships provided for camp staff. Recruiting of volunteer staff was an annual challenge, particularly finding qualified directors and guest speakers/missionaries. As the camping season grew longer, the challenge became increasingly difficult. Compounding the challenge was the sensitive matter of navigating Camp policy that stated women could not fill a leadership role (for biblical reasons then understood), even though capable women were available.

Throughout the years, a positive bank balance had been maintained, and a modest surplus added for necessary capital projects. The Camp experienced gradual physical growth, limited in part by available financial resources. A new chapel/dining room was built in 1970, and cabins were added gradually as required. By 1993, the Camp’s budget totalled $45,000, which included $14,000 for new projects and the purchase of adjoining property.

For most of the Camp’s early years, Peter Funk’s son Harvey, who lived in the vicinity, played a key role in the life of the Camp. In the mid-1970s, management of the Camp from Abbotsford was becoming increasingly difficult. Consequently, a joint “North-South” committee structure was formed, and a memorandum of understanding drawn up which divided the various responsibilities between the two committees. The South Committee attended to all capital improvements and purchase of supplies, and the North Committee to operational matters, including registration and advertising. An annual budget was jointly agreed upon, as were camp scheduling and staffing. Joint annual general meetings were held each fall, usually in Williams Lake.

In the mid-1960s, outside interest in purchasing the Camp developed, and serious consideration was given to selling, with the purpose of relocating to a site closer to Burns Lake. After some searching for an alternative site, recommendations were made to leave the Camp where it was; this enabled the committees to focus on improving camp facilities.

The Camp continued to grow and to develop its program and capital assets, with the total value of property and buildings reaching $296,000 by 1992. Discussion around transfer of ownership had been common, dating back to the mid-1980s. In 1990, the Camp was registered as the Ootsa Lake Bible Camp Society, and after the drafting of a mutually agreeable constitution, the Camp was sold to the Ootsa Lake Bible Camp Society on 11 May 1993 for $1.00, thus ending a significant 35-year chapter in the life of West Abbotsford Mennonite Church. The Camp has continued in operation to this day.