Cornelius G. Tilitzky: minister and teacher; born 1 May 1890 in the Fürstenland Mennonite settlement to Gerhard B. and Maria (Braun) Tilitzky. He was the fourth child in a family of five. He married Katherina Penner (22 December 1882 - 12 July 1966) daughter of Peter and Sarah Penner (22 December 1882 - 12 July 1966) on 5 June 1911 at Gruenfeld, Russia. They had five sons and three daughters. He died 4 February 1949 in Abbotsford, British Columbia of tuberculosis. 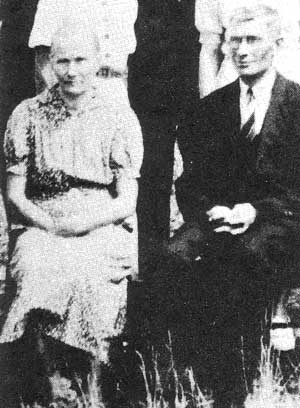 Cornelius moved with his parents to Einlage, Chortitza Colony at a young age and received teacher training and taught in his home village for seven years. Here he was baptized by Elder Isaak Dyck in 1910 and became active in the Mennonite Church as a Sunday school teacher and lay minister.

In 1926 the young family fled Russia to settle in Canada, settling in Hochfeld, Manitoba for two years before farming for nine years in Waldheim, Saskatchewan. During this time Cornelius was always active in church work. Arriving in Abbotsford, BC in 1936, he soon became involved in a newly begun church work in the West Abbotsford area and was elected the first congregational chairman of the United Mennonite Church (later West Abbotsford Mennonite Church) at its organizational meeting 15 November 1936. A teacher at heart, he was also elected the first Sunday school superintendent. Church services began with itinerant ministers and the congregation soon chose Peter P. Epp as leading minister. By 1939 Tilitzky was ordained to the ministry and took leadership of the congregation. The ordination took place in the church 10 May 1939 with Elder Jacob H. Janzen officiating.

In the early days the church met in several homes, including the Tilizky home, where the first baptism also took place. Tilitzky was aware, when he assumed ministerial leadership of the congregation, that there was concern over laxness of teaching and discipline and he very consciously strove to deepen spirituality and Christian education and to work at purification from within.

Cornelius suffered from tuberculosis in his later years and was even admitted to the Tuberculosis Sanatorium at Kamloops, BC in 1946 for medical treatment. His ministry was marred by illness and in 1944 he resigned from his leadership position and from ministry altogether in 1947.