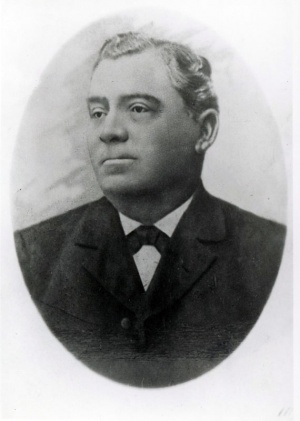 Isaak G. Dyck: minister and elder; born on 9 December 1847 in Rosenthal, Chortitza Mennonite Settlement, South Russia, to Elder Gerhard Dyck and Maria (Dyck) Dyck. On 28 June 1870, he married Margaretha Hamm, daughter of Gerhard and Agatha (Braun) Hamm. The couple had 15 children, eight of whom lived to adulthood. Isaak was elected minister of the Chortitza Mennonite Church on 18 January 1876 and Ältester in 1896. He died on 24 August 1929 after a severe illness and was buried in the Rosenthal cemetery.

As a child, Isaak attended the village school before continuing his education at the village’s Zentralschule, where he studied under Heinrich Epp, who preceded him as Ältester of the Chortitzer Church. He completed the pedagogy program there before he wrote the state exams to become a teacher, a profession that greatly influenced his work in the church and the Mennonite community.

In 1870, Isaak married Margaretha Hamm, and the couple moved to Grossfürstenland southwest of Nikopol. They later moved to Michaelsburg in the Fürstenland settlement, where Isaak taught at the school from 1873 to 1876. In addition to teaching, he rented out his land to local farmers and supplemented his income by investing in a brick factory. Isaak and Margaretha returned to live in Rosenthal in 1888, living in their house in town, where they kept animals and harvested fruit from the trees they had growing in their yard.

Dyck was elected minister of the Chortitza Church on 18 January 1876. In 1882, he was called to be the chaplain at the Anadol Forestry Camp, where young Mennonite men completed their alternative service, and he remained there until his family’s return to Rosenthal in 1888. For three years, he was president of the committee supervising the forestry camps, and he was president of the board of the Chortitza Zentralschule and the Mädchenschule. Altogether, Isaak served on the school board for 12 years.

After the death of Heinrich Epp in 1896, Isaak was elected Ältester of the church and ordained as leader of the congregation by Ältester Peter Klassen. As a leader in the community, he was frequently selected to participate in deputations sent to St. Petersburg to negotiate with the government on behalf of the Mennonites. As elder of the church, Isaak served churches in 18 villages around the area, working with a congregation of over 4000 people.

In February 1918, Dyck was captured and held for ransom but was soon released. During the night of 7-8 October 1919, he and his family had to flee from bandits to Dnepropetrovsk, where they remained at a son’s house for six months. On their return home, Isaak decided to ask the church to elect a successor to share the responsibilities of Ältester with him. In April 1922, he installed Peter Neufeld as co-Ältester to work with him. On 31 January 1926, the Chortitza church celebrated Isaak’s fiftieth anniversary of service, and the next year he retired.

Even after he officially retired in 1927, Isaak continued to work as the senior minister of the congregation, serving the church well into his eighties. However, his health began to decline and he suffered a series of strokes that eventually led to his death on 24 August 1929. His wife died over a year and a half later in 1931.

Isaak G. Dyck was a dedicated church leader who put the needs of his community before his own wishes. Throughout his long career, he helped to build the church, leaving a legacy of faithfulness for future generations to follow.

Isaak Dyck, elder of Chortitza Mennonite Church and son of Elder Gerhard Dyck, was born 9 December 1847 in Chortitza, Russia, and died in the same place, 24 August 1929. He attended elementary and secondary schools at Chortitza, married Margaretha Hamm (28 June 1870), taught at Fürstenland settlement 1873-1876, and was called into the ministry in 1876. From 1882 to 1888 he was minister and leader of the Anadol Forestry Camp where Mennonite boys did their alternative service. In 1888 he returned to Chortitza where he was elected elder in 1896 to succeed H. Epp. He was a minister for 53 years and an elder for 26 years. He served several times as president of the Allgemeine Bundeskonferenz. His motto was Bete und arbeite (“pray and work”).

For many years Dyck was the president of the committee that maintained and supervised forestry camps and president of the board of the Chortitza Zentralschule and Mädchenschule. Repeatedly he was delegated to negotiate with the government of St. Petersburg regarding the Mennonites. His sound judgment and vision usually assured him success. During the Revolution and Civil War following World War I, he felt that a younger person should shoulder the task and responsibilities. Thus he ordained and introduced Peter Neufeld as his successor in the office of elder in 1922. His wife followed him in death in 1931.