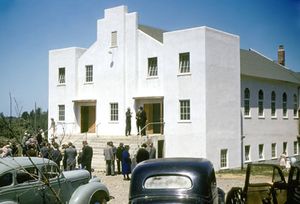 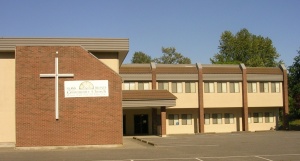 On 2 January 1947, a number of brethren representing 32 families from the North Abbotsford Mennonite Brethren Church (now Clearbrook MB) began holding meetings concerning the possibility of forming a new church. Their desire was to fellowship in their own community. Most of these families lived west of Abbotsford in the Aldergrove and Mount Lehman areas. By February 1947, a decision was made to purchase 5 acres on the corner of Ross and Sinclair in order to build a sanctuary, to be known as East Aldergrove Mennonite Brethren (MB) Church (now Ross Road Community Church).

Almost all of the charter members lived on farms where they raised dairy cattle, chickens and also cultivated raspberries and strawberries. The majority had little money, since 65 cents an hour was considered a fair wage. In faith, they bought the land for $1,500 (5 acres) and with John Buehler as supervisor, and then spent a further $3,000 to build the basement that was then covered with roofing material. A wood furnace provided heat and simple benches the seating.

The congregation organized itself as an independent congregation on 13 June 1947 with 93 charter members, and worship services started on 15 June of that year. The church joined the British Columbia Conference of Mennonite Brethren Churches in 1947. Two years later, on 18 April 1949, the building was dedicated at a cost of $13,000.

Not only did the church building change but what went on the inside as well. East Aldergrove services were originally held only in German. In 1959 the transition to dual English and German services began. By the late 1960s the services were entirely in English. In the mid-1980s a gradual change began from a more traditional style service to contemporary style music. In 2000 East Aldergrove changed its name to Ross Road Community Church.

Ross Road has also been involved in church planting over the years. In 1951 East Aldergrove assumed responsibility for a Sunday school ministry in the County Line area which eventually grew into an independent church, County Line Gospel Chapel, in 1958.