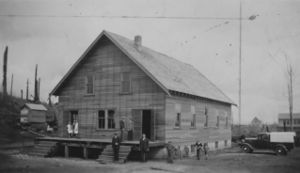 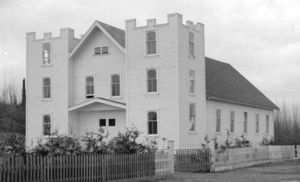 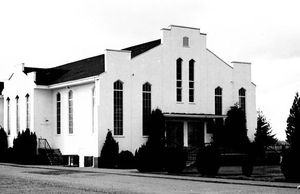 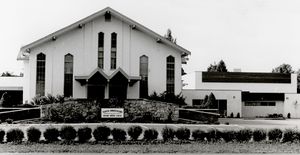 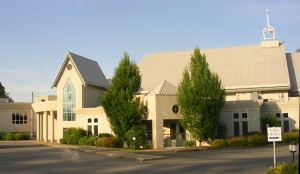 South Abbotsford Church has the distinction of being the first Mennonite Brethren (MB) church established in the Matsqui-Abbotsford area of the Fraser Valley in British Columbia. The church formally organized on 1 May 1932 as the Abbotsford Mennonite Brethren Church while meeting in the Farmers Institute Hall on Clearbrook Road. After the congregation divided into North Abbotsford MB Church and South Abbotsford MB Church in 1935, South Abbotsford built its first structure on the corner of Huntingdon and Gladwin Roads. The completed building was dedicated on 1 March 1936. Eventually, towers were added to the front of the church to allow for Sunday school rooms. The church experienced continued growth and the congregation purchased property on the corner of Huntingdon and Columbia Roads, where a newly constructed sanctuary was completed in October 1954. A dedication service was held on 10 October 1954. A subsequent building program in the 1990s resulted from an additional surge in attendance.

Additionally, South Abbotsford sought to accommodate academic needs in the Fraser Valley. The congregation started South Abbotsford Bible School in 1936 under the leadership of Cornelius C. Peters. Classes were suspended in 1941, but the school restarted in 1943 and was called Bethel Bible School (later known as Mennonite Brethren Bible Institute, then Columbia Bible Institute, now Columbia Bible College), which met in the church facilities. Also, in 1944, the Mennonite Educational Institute was first housed in this church.

Another significant contribution of South Abbotsford is its ministry to the Indo-Canadian people residing in the vicinity.  David and Stella Manuel came to spearhead this ministry in 1980, although some church members had begun some work prior to their arrival.