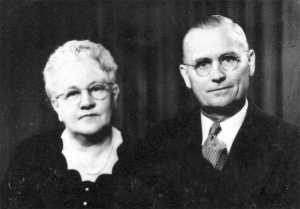 In 1899, when Henry was three years old, his family moved to Rosthern, Saskatchewan, where in 1912 he began his high school education at the German-English Academy (now Rosthern Junior College) in Rosthern. He then attended Nutana Collegiate Institute in Saskatoon. Although war interrupted his studies at Normal School (a teacher training school) in Saskatoon, he was given temporary permission to enter his chosen career. In January 1916, at the age of 19, Nikkel began his long teaching career, with first school being Willow Lake School near Dalmeny, Saskatchewan. Two years later he returned to Saskatoon to complete Normal School training in 1918.

In the summer of 1921 Henry enrolled at the Bible Institute of Los Angeles (now Biola University) and graduated as valedictorian in June 1923. Following the return to Canada, Nikkel served as teacher and principal in several schools, including the two-room Dalmeny School, the New Home School near Hepburn, followed by a 13-year stay at the Snowbird School near Laird.

In 1944 the Nikkels moved to Abbotsford, BC where Henry was invited to teach at the South Abbotsford Bible School (later known as Mennonite Brethren Bible Institute), with additional responsibility in the newly established Mennonite Educational Institute (MEI). In 1947 he left the MEI to focus on his teaching at the Bible school only. Here Henry served a further nineteen years as teacher, followed by eight years as librarian. In 1974, at the age of 78, Henry retired, concluding 56 years in education. Henry writes, “It was God who sustained me and enabled me to serve people for more than half a century.”

Ordained as a minister on 1 January 1929, Henry Nikkel had a long career, first as a lay minister and then as an ordained clergyman, in Dalmeny, Hepburn, Laird, Brotherfield, South Abbotsford, and Abbotsford (now Central Heights) MB churches. In the summer of 1945 he became pastor of the South Abbotsford MB Church. In January 1950, Henry became pastor of the newly formed Abbotsford MB Church, a position he held until the fall of 1960. His wife Marie was consistently supportive of Henry’s ministry, and in her own right made a major contribution with her hospitality, her friendly demeanor and her involvement in various congregational ministries. She died on 2 August 1968, only nine days before their 50th wedding anniversary.

After her death Henry continued his ministry for almost three more decades until his death on 29 August 1985. He was known throughout the region and beyond as an outstanding Bible expositor and preacher. One of his little black sermon and record books indicates that he conducted 196 weddings, the last one for his granddaughter, Tamara Froese, on 26 August 1983.