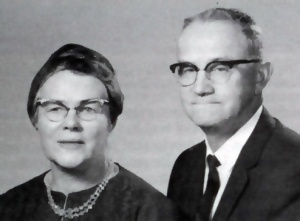 In February 1929 John and Margret, now with three children, moved to Agassiz, British Columbia.  Here John began teaching and preaching in the Agassiz Mennonite Brethren Church, which at first operated as house fellowships until a church was built. In 1933, now with a family of five, the family moved to Abbotsford, BC. A year later John was asked to assist Abram Rempel in leading the recently formed South Abbotsford Mennonite Brethren Church. On 13 July 1941 John was ordained to the ministry as served as assistant pastor from 1943 until 1949.

While operating a newly acquired 40-acre farm, he continued his preaching duties and somehow found time to enroll as a student in the Elim Bible School in Yarrow. On 31 January 1944 John's wife Margret gave birth to their ninth child. However, owing to birth complications, Margret died on 15 February 1944, leaving him with a family of nine children. The home felt empty without her songs, laughter, prayer and loving care.

Several months later John married Susie (Hiebert) Friesen, a widow with six children who lived in Foam Lake, Saskatchewan. John and Susie had three more children, which made a family of 18. To support the family John purchased a sawdust delivery trucking business in 1944.

By the end of the 1940s the South Abbotsford Mennonite Brethren Church had grown to 500 members, requiring a division. Approximately 200 members left to form the McCallum Road Mennonite Brethren Church. John Stobbe was now elected to be the pastor of the South Abbotsford congregation. He served the church in this capacity for nine years from 1950 until 1959, leading the church through a major relocation and building project. Owing to failing health he stepped down from senior leadership responsibilities but continued to serve as assistant pastor from 1960 until 1970 while operating a 3.5 acre poultry and raspberry farm in Abbotsford.  Although he never had the opportunity for higher education, his wisdom and practical understanding of Scripture equipped him to for various leadership roles for some thirty years.

John Stobbe was a good listener. When someone would come to him with a complaint, he would quietly listen and then say, "Let it go. And don't be angry and bitter." He did not hold grudges, and was not a complainer.  He honored confidentiality and could be trusted with private matters. Susie supported her husband as a loving wife. She was a caring mother, a spiritual supporter with a gift for hospitality that was shown to countless visitors who were welcomed into their home for meals and night lodging.