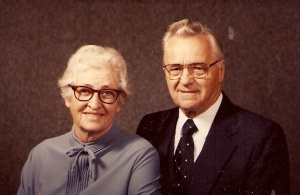 William’s education was interrupted numerous times during his youth due to the upheaval caused by the Russian Revolution. William revealed later that he had kept his sanity during these years by improving his artistic talent (some of the sketchbooks he filled are still in the family possession).

The Neufeld family immigrated to Canada, arriving in Winnipeg in April 1926. The first summer in Winnipeg, at the age of 17 and under the inspiring preaching of C. N. Hiebert, pastor of the Winnipeg City Mission, he renewed his childhood commitment to Christ and was baptized in the Assiniboine River on 1 August 1926. In November of the same year, the family moved to Altona, Manitoba where they bought a small flourmill.

William was finally able to get an education when the family sent him to the Mennonite Collegiate Institute in Gretna, Manitoba from which he graduated in 1929. Because of the Depression of the 1930s, he relinquished his dream of becoming an architect. Attending the Normal School in Winnipeg instead, Neufeld gained his Teaching Certificate in 1930 and consequently taught in various country schools in Southern Manitoba (Oatfied, Arnaud, Haskett, Osborne). He graduated from the University of Manitoba with a BA degree in 1937.

In 1941, he married Hilde Neufeld. While teaching high school in Selkirk, Manitoba, his life was again interrupted by uncertainty, this time by World War II. Believing in the Mennonite concept of pacifism, he applied to become a conscientious objector. The United Church of Canada hired him as a government agent to the aboriginal people at Island Lake in northern Manitoba. Stationed on a 5-acre island, his assignment there was to be a liaison between the government of Canada and the aboriginals, looking after the spiritual, physical and economic welfare of the people. This included dentistry which he accomplished after a two-month crash course in Winnipeg! The Neufelds stayed for almost two years until the end of the war.

William and Hilde moved to British Columbia in 1945 where he taught English at the Mennonite Educational Institute (MEI). For the first time, he began to enjoy teaching. He was responsible for establishing the drama program, occasionally writing the script himself when no Christian drama was available. His artistic talent was handy in staging, painting backdrops and even applying stage make-up. This idyllic life was only interrupted for one year (1952-53) when he returned to Winnipeg as principal of Mennonite Brethren Collegiate Institute.

During his 13 years in the MEI, William also became very active in the church, working in Sunday school, youth programs, and various committees. He was also often called on to preach as he was one of the few who could do so in the English language. In 1959 Neufeld became the first salaried pastor of South Abbotsford Mennonite Brethren Church. After seven years, in 1966, he was called by the North Kildonan Mennonite Brethren Church in Winnipeg and pastored there for 13 years. Hilde worked side-by-side throughout his years of ministry and was a great asset, especially with the home and hospital visits.

As a pastor, William was also diligently involved in the Canadian MB Conference as a member of the Board of Higher Education. For six years, he was also a member of the Literary Committee of the General Conference of Mennonite Brethren Churches. In Manitoba, as served as chairman of the Minister’s and Deacon’s Committee.

Neufeld officially retired at the age of 70. He kept busy preaching, traveling and writing books. Ironically, he was often requested to preach in the German language by the various Manitoba Mennonite churches, as he was one of the few who could still do so in the 1980s and 1990s. Neufeld spent a number of months in Edmonton, Alberta in 1980 as the interim pastor in Lendrum MB Church, and also helped promote the work of the Canadian Bible Society. This last assignment took him to many different churches throughout Manitoba and to many different denominations. Fulfilling his life-long dream of traveling, he also managed to see Palestine, Greece, Europe and several South American countries.

Although, initially, Neufeld had strenuously resisted the ministry, he definitely felt the Lord’s call to help spread the kingdom of God. His meticulous approach in all he undertook, his love for studying and exploring new avenues and his artistic nature allowed him to accomplish much in various areas.

The personal papers of William I. Neufeld are held at the Centre for Mennonite Brethren Studies, Winnipeg, MB.