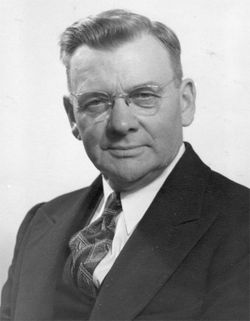 Franz C. Thiessen: educator, conductor and minister; born 25 July 1881 in Rückenau, Molotschna Mennonite Settlement, South Russia to Kornelius and Katherina (Nickel) Thiessen. He was the third child in a family of eight. Franz attended elementary school in Rückenau, secondary school in Orloff, and subsequently took two years of teacher training in Halbstadt. In the late 1890s, Franz accepted the Lord Jesus as his personal Savior, was baptized on confession of faith, and became a member of the Rückenau Mennonite Brethren Church.

On 9 August 1901, Franz married Lydia Wieler (21 October 1879 - 23 February 1908), daughter of Johann Wieler and Helena (Thielmann) Wieler. They had two children. Franz accepted a teaching position in Reinfeld, Zagradovka Mennonite Settlement. Later Franz continued with his studies in the city of Sevastopol, Crimea, where he boarded with the family of Peter M. Friesen. Among other activities, he assisted Friesen in the collection of papers and materials for his epic history of the Mennonites. In 1907 he took on a position at the Alexanderkrone High School.

Lydia died in 1908 and two years later Franz married her sister, Margaretha Wieler (1 March 1888 - 9 December 1984) on 10 April 1910 in Rückenau. They had six children. That same year, Franz took a position at the secondary school in Davlekanovo, a growing settlement near the Ural Mountains. The school was coeducational in contrast to the schools in southern Russia. Franz became conductor of both the school and the church choirs. The choirs put on a performance of Mendelsohn’s oratorio “Paulus”, which was a first for a Mennonite community. Franz had transcribed the entire oratorio into a musical cipher (number) system to which Mennonites were accustomed.

When World War I broke out, Franz was mobilized into the Medical Corps. He spent two years in the Crimea working with convalescing soldiers after which he again returned to the school at Davlekanovo. When teaching in German and giving religious instruction were forbidden, Franz resigned as school principal.

In 1924, Franz and his family moved to Moscow where he helped immigrants to Canada with their passports. In July 1925, Franz bought passage for his family to Canada. In Rosthern, Saskatchewan Franz was offered a teaching position of religion, German and music at the German-English Academy. In 1932 the Thiessen family moved to Winnipeg, Manitoba.

In Winnipeg Franz taught at an evening school for Mennonite girls who worked in the city. He also taught German language, culture and music on Saturdays to the young people in the North-End, South-End and North Kildonan Mennonite Brethren churches. He organized a choir from various denominations and put on several concerts, including Mendelsohn’s "Paulus", accompanied by an orchestra, which was also a first for the Mennonites of Winnipeg. He also presented workshops for church choir conductors in Ontario and British Columbia

Franz was ordained as a minister in 1937 and shortly thereafter was elected to the leadership of the Winnipeg North-End Mennonite Brethren Church, a position he held until 1943. During these years Franz was secretary of the Afrika-Missions-Verein (Africa Mission Society) that he had helped to establish in 1934. The Mennonite Brethren Conference took over the work of the Society in 1943. Franz was a member of various committees – the Winnipeg City Mission, the Canadian Mennonite Board of Colonization and a committee that supported the cause of the mentally ill.

In 1943 Franz was invited to teach at the Bethel Bible School (later called Mennonite Brethren Bible Institute) in Abbotsford, British Columbia. 1946 marked the beginning of the Mennonite Educational Institute in Clearbrook BC and Franz became its first principal. He stayed on as teacher of German and Religion for another five years.

Franz was also involved in the creation of a new German songbook for the Canadian Mennonite Brethren Conference. He would not live to see the day of its publication. On 24 February 1950 he died of a heart attack while standing beside his car on the way to school. He had always hoped to die while in the midst of his work.

Epp, Frank H. Education with a Plus: the Story of Rosthern Junior College. Waterloo, ON: Conrad Grebel Press.