The Mennonite Reporter was launched on 3 August 1971, in Waterloo, Ontario, with the name Canadian Mennonite Reporter. Frank Epp was the editor and Dave Kroeker was managing editor. Billed as "An Anabaptist periodical of news and interpretation," the newspaper (in 11 x 17 inch tabloid format) began publication just months after the demise of The Canadian Mennonite, published in Manitoba from 16 October 1953-February 1971, also with Epp as its founding editor. Wanting to "fill the communications gap" left by the cessation of the Manitoba-based paper, a group of 65 Mennonite leaders in Ontario, led by Aaron Klassen, then chair of Mennonite Central Committee Ontario, pledged funds to begin a new paper. Major impetus was given to the venture when the Mennonite Conference of Ontario and the Western Ontario Mennonite Conference (Mennonite Church bodies now part of Mennonite Church Eastern Canada) agreed to suspend their conference periodical, the Evangel, in favour of the new national periodical. 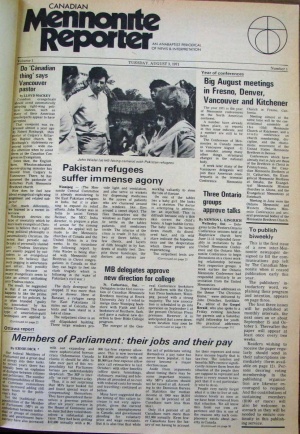 The introductory issue of the Canadian Mennonite Reporter noted that the first three issues would appear at monthly intervals, then "at least every two weeks." With the 18 October 1971 issue began the bi-weekly schedule that remained. Epp served one-third time as editor (while teaching at Conrad Grebel College), and Kroeker served one-half time. The masthead listed 30 "contributing editors," including Rudy Wiebe, Ernie Regier, Barbara Smucker, David Schroeder and Peter J. Dyck. A one-year subscription was $5.00 ($3.00 with a bulk mailing to congregations). The Mennonite Publishing Service was incorporated early in 1972 to guide the paper, with Milton R. Good as founding board chair. Other members of the executive were Aaron Klassen, John W. Snyder, Rudy H. Janzen and Harry Nigh, with Glenn Fretz as design consultant. (This publishing group also raised $3,500 to help The Canadian Mennonite liquidate its debt.) The initial budget was $40,000.

The 10 January 1972 issue saw the disappearance of "Canadian" from the name, along with a redesign by Glenn Fretz. "Canadian" was dropped, explained the publisher, "not to serve Canada less but to appeal to non-Canadian Mennonites, especially those in the USA, more." Like its predecessor, the Mennonite Reporter had an inter-Mennonite focus, seeking to inform Canadian Mennonites about what was happening in the Mennonite community and beyond. While the focus was on news, articles ranged from devotional material to features on the arts to analysis of social and political issues. Letters from readers provided lively debate.

In August 1973, Kroeker succeeded Epp as editor of the Mennonite Reporter, with Margaret Loewen Reimer as assistant editor. Contributing editorials and articles were eight "editorial associates": J. Lawrence Burkholder, Hugo Jantz, Ralph Lebold, Vernon Leis, Harry Loewen, Waldemar Regier, David Schroeder and Maynard Shelly. From the outset, the paper encouraged conferences and churches to buy every-home plans for their members. Mennonite Church congregations in Ontario had a conference-funded plan from the early 1970s. While the Conference of Mennonites in Canada was reluctant to take a similar approach, it did promote every-home circulation with subscription subsidies.

In September 1979, Ron Rempel became the editor, with Loewen Reimer as associate editor. (She took over as acting editor/manager in 1988-89 while Rempel was on leave.) In 1988, the move to computers and desktop publishing transformed production of the paper – no more cutting and pasting of typeset strips onto a layout sheet. The 25 July 1988 issue introduced a design change (again by Glenn Fretz), with contrasting fonts for heads, screened bars, and a smaller bar at the top for section heads. The mission statement now read: "An independent, inter-Mennonite paper of news and comment, circulated across Canada and beyond." A later version said that the Mennonite Reporter "aims to build community through open and fair reporting and an exchange of views on issues facing the church." The periodical was an active member of The Canadian Church Press (from which it received many awards over the years), Meetinghouse (an association of Mennonite editors), and, for a time, the U.S.-based Associated Church Press.

With the internet came a major change in staff organization. The full-time "western regional editor" position based in Winnipeg, held by Allan Siebert 1979-85 and Wilma Derksen 1985-95, was divided in 1995 among four "regional correspondents," one for each province west of Ontario. An employee who exemplified these changes was Aiden Schlichting Enns who served as interim western regional editor in 1992-93, marketing representative 1993-95, and Manitoba provincial rep 1995-97. (He was also the first "conference editor" with Canadian Mennonite from 1997-2000.)

The major change under Rempel’s leadership was the transition of the Mennonite Reporter from an independent, inter-Mennonite periodical to one linked specifically with the Conference of Mennonites in Canada (CMC). The process began in the mid-1990s, fueled by dormant subscription levels, CMC’s desire for a more effective communications vehicle, and the move toward integration between CMC and Mennonite Church bodies in Ontario. (Full integration occurred with the birth of Mennonite Church Canada in 2000.) Subscriptions stood at around 10,000 at this time, with over 90 percent coming from the groups that were integrating. A cross-Canada consultation called for a magazine format and more inspirational faith articles. A task force explored how the Mennonite Reporter might be transformed to make it more widely distributed in the groups where it already had the widest readership.

In 1997, CMC delegates approved a joint venture that would see the Mennonite Reporter replaced with a new periodical, Canadian Mennonite, supported by CMC and its five area conferences. The new periodical would be a magazine instead of a tabloid, and would include more articles on faith and congregational life, with announcements of births, baptisms, marriages and deaths. CMC agreed to enter into a cost-sharing formula that would fund subscriptions for every CMC household. The conference would have greater board representation but agreed to leave the publisher as a separately incorporated entity. The editors would continue in their roles. 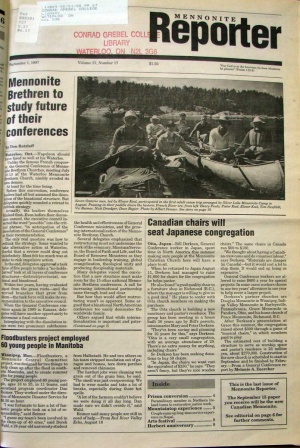 A searchable pdf file of the annual Mennonite Reporter printed indexes (1971-1982 and 1984-1996) is available through the Centre for Mennonite Brethren Studies (Winnipeg).