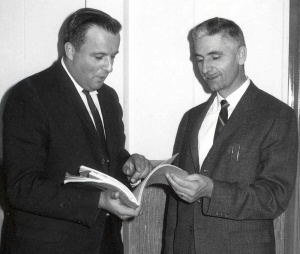 Aaron Klassen: church lay leader, farmer, realtor and life long student; born 9 December 1924 in Halbstadt, Manitoba to David D. Klassen and Susan (Heinrichs) Klassen. He was the third oldest child and oldest son in a family of nine sons and six daughters. In 1959 he married Helen Heinrichs of Toronto, Ontario, daughter of Julius and Mary (Pauls) Heinrichs. They had a son, Robert, and a daughter, Sherri. Aaron died on 18 April 2011.

Farming and education were two lifelong passions for Aaron. Even more important than his work identity was his life in the Mennonite church community. At age 20, he bought his own farm in Homewood, Manitoba; the farm provided a touchstone and a source of income over the next 20 years as he pursued a variety of educational and work interests.

Although he had not completed high school, he graduated from Canadian Mennonite Bible College in Winnipeg, Manitoba in 1952 and from Bethel College in North Newton, Kansas in 1953, and then studied one year at Mennonite Biblical Seminary in Chicago. He served as a Bible school teacher and principal at Bethel Bible Institute in Abbotsford, British Columbia for one year (1954-55) and as Mennonite Central Committee country director in Mexico for two years (1955-57)—all the while managing the farm back in Homewood.

Education beckoned once again. This time it was two years of graduate studies in history at the University of Chicago from 1957-1959. While there, he found his voice as an active and concerned lay person in the church by writing his elders in Manitoba to protest the firing of a teacher from Canadian Mennonite Bible College. Also, while in Chicago, he accepted the invitation from Frank H. Epp, then editor of The Canadian Mennonite, to serve as interim editor in Altona, Manitoba for two years during Frank’s study leave. In 1961, Aaron and his family moved to Toronto where he taught high school and sold real estate. After five years in Toronto, they moved to Kitchener in 1966 and became active members of Stirling Avenue Mennonite Church. For the next 40 years, Aaron’s work included real estate, managing the Kitchener Provident Bookstore, running a group home together with Helen, and returning back to real estate in both the residential and farm sector.

Woven through Aaron’s work life were many wider church involvements. For example, in 1971, he was part of a group that advocated for the formation of a new periodical when the Manitoba based newpaper, The Canadian Mennonite, discontinued in February 1971. As a result, the Mennonite Reporter was started in August 1971, with offices in Ontario. As chair of the Mennonite Central Committee (MCC) Ontario board for eight years (1966-1974), he represented the provincial organization at both MCC Canada and MCC binational meetings. He subsequently served on the Conrad Grebel College board for six years and for some years on the property and finance committees of both the former Conference of Mennonites in Canada and the former Mennonite Conference of Ontario and Quebec. And he was involved in supporting projects and attending the conventions of Mennonite Economic Development Associates.

In both his wider church and congregational involvements, Aaron was a leader not only through the official positions he held, but in how he lived his faith and how he related to both young and old. He resonated with the Franciscan benediction posted in his home office: "May God bless us with discomfort at easy answers, half-truths, superficial relationships, so that we will live deep within our hearts. May God bless us with anger at injustice, oppression and exploitation of people, so that we will work for justice, equity and peace…"