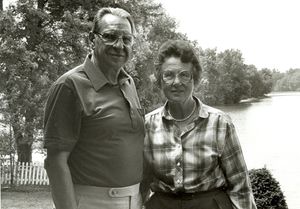 J. Lawrence “Larry” Burkholder, a Goshen College and Harvard Divinity School professor and administrator, as well as a scholar and interpreter of Mennonite theological ethics, was born 31 October 1917 in Newville, Cumberland County, Pennsylvania, USA to Henry L. Burkholder (24 October 1878-18 December 1938) and Mary Seitz Burkholder (1 November 1884-14 March 1941); he was the third child in a family of two boys and three girls. On 20 August 1939 he married Harriet Lee Lapp (31 March 1916-6 September 2007), who he met while attending Goshen College. They had two sons and two daughters. J. Lawrence died on 24 June 2010, in Goshen, Indiana. Lawrence and Harriet are buried in the Elkhart Prairie Cemetery in Goshen.

Lawrence Burkholder grew up in Newville, Pennsylvania, near Shippensburg State Teachers' College, where his father, Henry, who had an MA from New York University in 1929, and had begun work on a PhD, taught from World War I until his death in 1938. In 1939 Lawrence graduated from Goshen College. He then was among the earliest (Old) Mennonites to secure a BD (Gettysburg Theological Seminary) before his ordination in 1942. In 1944, after a two-year pastorate at the First Mennonite Church of New Bremen in New York, he volunteered for relief work in China. Burkholder spent most of a year in India before flying over the Himalayas into China. In 1946 his family joined him in Shanghai, where they resided until being evacuated in December 1948.

These years in China were deeply influential in shaping Burkholder's lifelong interests and creative thinking. Appointed by the Mennonite Board of Missions, Elkhart, Indiana, he directed programs for both Mennonite Central Committee and Church World Service. As a relief administrator he worked closely with the United Nations China Clearing Committee. He later observed that these years in China introduced into his thinking "complexity and ambiguity, and sometimes tragic necessity." He added, "Nothing in my Mennonite background prepared me to make any but unambiguous choices."

On returning to North America, he began a graduate program in theology and ethics at Princeton Theological Seminary, where he eventually earned a ThM (1951) and ThD (1958). He taught at Goshen College between 1949 and 1961. In 1961 he joined the Harvard Divinity School faculty as the Victor S. Thomas Professor of Divinity and first chair of the Department of the Church. In 1971 he responded to the call of Goshen College to serve as president, a position he held until 1984.

Burkholder's thinking centered on two themes. The first was discipleship. In his teaching and several essays he connected the Anabaptist notion of "Nachfolge Christi" to the writings of Dietrich Bonhoeffer. At Harvard he once had Bonhoeffer's fiancée, Maria von Wedemeyer, visit his seminar on discipleship. He lived his commitment "to serve Christ by loving the neighbor with greater understanding and effectiveness.”

The second theme is represented by his dissertation title: "The Problem of Social Responsibility from the Perspective of the Mennonite Church" (1958; published in 1989). Here he connected his China experience to what he felt were inadequacies in Mennonite ethics. He asked whether Mennonite ethics could deal with "both the essentials of Christianity and the realities of modern life." He appealed for church discernment (another of his favorite terms) to consider "perplexing contemporary issues, not to abandon the way of the cross [but rather with] creative imagination, courage to face suffering, and a renewed commitment of faith to follow the way.” In a noteworthy autobiographical reflection, The Limits of Perfection (1993), he connected his life experiences to his ethical thought in a stimulating narrative.

As a highly respected president of Goshen College, Burkholder made unique contributions that enhanced the visibility of the college in both the local community and in Mennonite congregations. He encouraged and directed a successful campaign to build an endowment called "The Uncommon Cause."

One of his singular achievements was to extend the college's international education component—the Study-Service Term—to China. He first returned to China in 1975. After several additional visits he negotiated an undergraduate exchange with the Sichuan Provincial Bureau of Higher Education. This program initiated in 1980, included dozens of Chinese scholars who spent a year at Goshen studying English language, North American literature and culture, and Christian theology. He also negotiated an inter-institutional program then known as China Educational Exchange. He lived the pain of China in the 1940s as well as the satisfaction of China's renewal after 1975.

Lawrence Burkholder was a faithful servant of the church, denominationally and ecumenically. He is widely considered to be one of the twentieth-century Mennonite movement's most provocative and creative thinkers.

Burkholder, John Lawrence. The Problem of Social Responsibility from the Perspective of the Mennonite Church. Elkhart, IN: Institute of Mennonite Studies, 1989.

Burkholder, J. Lawrence. The problem of social responsibility from the perspective of the Mennonite Church. Elkhart, Ind. : Institute of Mennonite Studies, 1989.