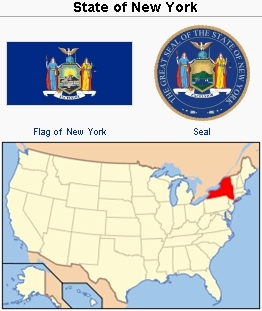 New York is located in the Northeastern region of the United States of America and is the country's third most populous state. New York is bordered by New Jersey and Pennsylvania to the south, Connecticut, Massachusetts and Vermont to the east, and the Canadian provinces of Quebec and Ontario to the north. The area of the state is 54,555 square miles (141,299 km²) and in 2008 had an estimated population of 19,490,297.

As early as 1643 Mennonites are known to have been living on Manhattan Island, now New York City. A French Jesuit traveler, Father Jaques, in a letter of 1643 from Manhattan mentions "Anabaptists here called Menists" as one of the religious groups found on the island. Mennonites were reported in another document of 1657 at Gravesend on Long Island. The term Anabaptist appears frequently in early colonial New York records. However, no record of an organized congregation from this early time has been found, and no permanent settlement was made by them.

The only Mennonites to settle in the state of New York were settlers from Eastern Pennsylvania, largely from Lancaster County, who located in Niagara County (Falls Church) in 1810 ff. and in Erie County (Clarence Center or Good's Church) in 1824 ff. The former congregation was very small and soon died out. The latter was more substantial but had practically died out by the beginning of the 20th century. Several families of Krehbiels from the Palatinate located at Clarence Center in 1831 ff., and a small fraction of this congregation followed a Krehbiel preacher in 1875 into the General Conference Mennonite fellowship, but the group was small and ultimately died out. The Clarence Center congregation was revived by new arrivals beginning in 1920 and in the 1950s was a flourishing congregation with 187 members. A Conservative Amish Mennonite congregation was started in the same community at Alden about the same time and in 1955 had 188 members. An Old Order Amish settlement was founded at Conewango Valley, New York which had two congregations with a total of 113 members, with a small neighboring congregation near Sinclairville. An independent Conservative congregation existed at Clarence 1921-1948. 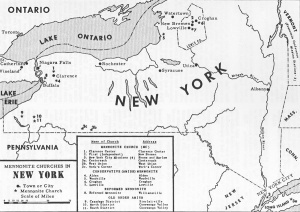 In 1833 ff. a large Conservative Amish Mennonite settlement was established near Croghan and Lowville in Lewis County, in the northeastern part of the state, by immigrants direct from Alsace and Lorraine, increased by settlers coming from the Amish community west of Kitchener (see Ontario), Ontario. In 1955 this settlement had three congregations with a total of 631 members, one of which was at Woodville, some 50 miles nearer the St. Lawrence River. In 1941 a group withdrew from the Conservative church to form the New Bremen Mennonite Church, an independent congregation which in 1955 had 194 members. A large block of the Conservative members withdrew in 1849 to form an Apostolic Christian congregation.

Thus the total of Mennonites and Old Order Amish in the state in 1955 was 1,119, distributed as follows: Conservative Mennonite 819, Mennonite Church (MC) 187, Old Order Amish 113. A Reformed Mennonite congregation was established at Williamsville, New York, near Clarence, about 1834, which had 34 members in 1948. The Mennonite Brethren in Christ had a congregation of 48 members on Staten Island, a borough of New York City, and a mission in Binghamton on the south-central border of the state.

New York City and Long Island have become a locus of mission work for the Lancaster and Franconia Mennonite (MC) conferences in the mid-20th century. The Lancaster Conference had four stations, with a total of 52 members, three in the Bronx (1949, 1951, and 1954), and one a Black mission in Harlem (1954). The Franconia Conference had a work at Centereach, Long Island, with 10 members, started in 1953. The House of Friendship, a mission to Jews, was established as an outpost of the Maple Grove congregation (Ohio and Eastern Conference) near Atglen in Lancaster County, Pennsylvania in 1956. Further mission stations were established in the western part of the state as follows: by the Lancaster Conference at York's Corners in Allegany County in 1952, and at West Union in Steuben County in 1954, by the Conservative Mennonites at Williamsville in 1936, and by the Clarence Center Mennonite Church (MC) at Arcade in Allegany County in 1956. -- Harold S. Bender

From World War II to the mid-1980s the Mennonite population in New York State (not including the Old Order Amish) nearly tripled to more than 2,700 distributed among 45 congregations and 10 different conferences, most of which had their conference base outside the state. However, in the 1970s and 1980s a number of congregations relinquished their relationships to outside Mennonite conferences and formed their own New York State Fellowship of Mennonite Churches (NYSF). After the founding of this conference in 1973, 23 congregations with 2,033 members related to it. The Northeast cluster around Lowville had 10 Mennonite congregations (8 in NYSF) with 1,405 members and more than half of all Mennonites in the state. Smaller clusters of the NYSF were Western Tier (near Buffalo: 4 congregations, 306 members); Southern Tier (near Corning-Elmira: 6, 284); Central Tier (Rochester-Syracuse: 5, 127). There are seven additional congregations scattered throughout the state, each belonging to a different out-of-state conference. These 7 have a total of 171 members. Most of the 30 Mennonite churches outside New York City were started since World War II. Only four originated earlier (Crogan, 1833; Lowville, 1913; Alden, 1924; and Clarence Center, 1923).

The other large cluster of Mennonite churches was in the southeastern end of the state, in the New York City metropolitan area. Seventeen congregations (including 2 Brethren in Christ churches in the Bronx and Brooklyn), with about 550 members scattered throughout the five boroughs of New York City, were founded since 1949. Since 1980 these churches (except the Brethren in Christ) have formed a New York City Council of Mennonite Churches which looked like it might develop into a separate district conference. The NYC Council of Mennonite Churches grew out of a minister's fellowship that began in 1960. The council has had cooperative programs. Camp Deerpark (85 miles/ 136 km northwest of the city) at Westbrookville, has been owned and operated by the New York City Mennonite churches since 1969.

The Mennonite population in New York City is very diverse and multi-ethnic. For example the pastors in the 1980s of these NYC congregations were from the following ethnic backgrounds: African-American, Swiss-German, Garifuna (decendants of black slaves and indigenous Carib peoples in Belize), and various Hispanic groups (Puerto Rican, Colombian, Dominican Republic). These different ethnic groups were all represented on the executive committee of the New York City Council of Mennonite churches and at its bimonthly meetings.

The New York City Mennonite churches were developing a vision that would make them completely indigenous (self-governing, self-supporting, self-propagating) and integrated. They had a positive partner relationship with the founding mission boards and conferences which spawned them (Eastern Mennonite Board of Missions and Charities, and Mennonite Board of Missions, Lancaster Conference, and Atlantic Coast Conference). They were developing a mission strategy that called for planting new churches and developing older ones to be strong and less dependent. They were developing their own urban leadership training program that would pave the way for stronger and more effective urban churches. With NYC Mennonite Churches becoming a conference and the New York State Conference already one, Mennonites in New York State represent some of the most diverse, most integrated and most aggressively mission-minded in the country.

Statistics for the above table are from The ARDA: The Association of Religion Data Archives. "New York State Membership Report, 2000." http://www.thearda.com/mapsReports/reports/state/36_2000.asp (accessed 23 February 2009).