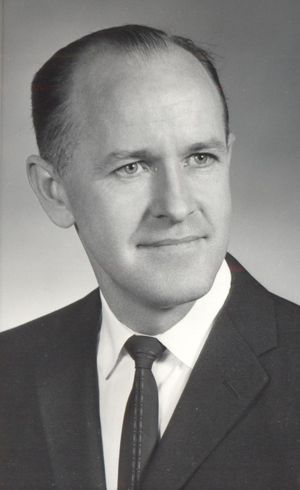 As a teenager, David became active in the southern Manitoba co-operative movement which instilled in him a vision for “practical” Christian faith worked out in daily life. During World War II, David, as a convinced conscientious objector, defended this position himself in court, rather than relying on his Sommerfelder bishop to speak for him. He performed his alternative service during the war at the St. Boniface Hospital in Winnipeg.

David Schroeder’s career as a pastor was cut short, however, when he contracted polio during an epidemic in Winnipeg in fall 1953. He was told by doctors he could not work for five years, so he diverted his focus in an academic direction. He completed a MDiv at Mennonite Biblical Seminary (then located in Chicago) in 1956, and a ThD at the University of Hamburg in 1959 where he studied with Leonhard Goppelt and Helmut Thielicke. His dissertation was titled “Die Haustafeln des Neuen Testaments : (ihre Herkunft und ihr theologisches Sinn),“ a study of the household codes in the New Testament.

David Schroeder then began a long career (1959-1994) at Canadian Mennonite Bible College in Winnipeg (now part of Canadian Mennonite University). He was a popular and stimulating teacher who students affectionately called “Doc” Schroeder. He combined a gentle nature with the ability to reflect creatively on complex issues facing the church. He was also know as a revered mentor and counsellor of students. His ability to relate to persons from many educational levels made him a popular speaker in Mennonite congregations throughout Canada. In that spirit he wrote several popular Bible study guides for use in private study. His approach was rooted in a biblical theology that found a path outside the Fundamentalist-Liberal conflict, and had an affinity with the “recovery-of-the-Anabaptist-vision” movement within the larger Mennonite world.

David Schroeder also cared about family. For over 50 years he lived in a four-generation household, and he published a genealogy of the Schroeder family in 2006.

Harry Huebner, one of Schroeder’s students and later a colleague, said, “[David] refused to give simple answers to difficult problems because he believed in the capacity of people to hear the voice of the Spirit…. Churches across the Mennonite world sought not only his biblical knowledge, but his wisdom in bringing issues of the times into interaction with the biblical narrative in ways that often resulted in that ‘a-ha’ moment.”

Books by and about David Schroeder