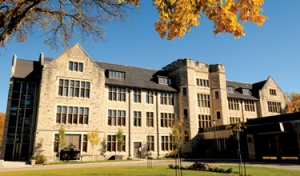 In the early 1990s people from the Mennonite business community in Manitoba and from four Manitoba Mennonite colleges—CMBC, Concord College, Steinbach Bible College and Menno Simons College—met to talk about inter-Mennonite co-operation in higher education. This led to formal discussions among the colleges, beginning in 1995. Steinbach Bible College withdrew from the process in 1996.

In August 1998, the government of Manitoba proclaimed the charter for the creation of a university-level, degree-granting federation of Mennonite colleges. On 18 November 1998, the three colleges signed a Memorandum of Agreement, signifying final approval for the creation of the Mennonite College Federation. On 4 May 1999, the agreement to purchase 500 Shaftesbury, formerly the Manitoba School for the Deaf located across the road from CMBC, was concluded. The Mennonite College Federation began offering its new, jointly sponsored academic programs in September 1999. By September 2000, CMBC and Concord College located together on a common campus at 500/600 Shaftesbury Boulevard (Menno Simons College remained in downtown Winnipeg as CMU’s campus at the University of Winnipeg.)

Each college retained a president until June 2003 when CMBC president Gerald Gerbrandt was appointed president of the university. In October 2003 the university moved from a federated model with three separate college boards, each elected by the individual college's ownership groups, to an integrated model. The CMU Council was formed, representing the three ownership groups, along with a Board of Governors, elected by the Council.

In October 2008, CMU became a member of the Association of Universities and Colleges of Canada.

In 2010-11 CMU offered a variety of academic programs on the Shaftesbury Campus, Menno Simons College (on the campus of The University of Winnipeg), and the Outtatown School of Discipleship – an eight-month program of cross-cultural study, service, and faith formation with a semester in either Guatemala or South Africa.

In 2010-11 approximately 1750 students (920 FTE) were enrolled in courses at CMU. Faculty included 45 full-time faculty as well as part-time faculty and sessional appointments. Its annual budget in 2010-11 was approximately $12 million. The University had no operating debt and a relatively modest capital debt resulting principally from the construction of a student residence (Concord Hall).