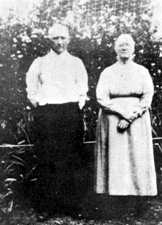 The Kauffmans moved frequently, from Iowa to Missouri, Kansas, Nebraska, back to Kansas, Iowa, Montana, California, New York and then back again to Iowa. Drought and other economic difficulties accounted for much of this mobility, but some of the moves were also a response to ministry.

The Kauffmans were baptized and received as members of the Amish Mennonite Church. In 1895, while living in Lyons County, Kansas, Daniel Kauffman was ordained a minister to serve the Amish-Mennonite congregation near Hartford, Kansas. For various reasons, but mainly because of continued dry weather, most of the families of that church moved elsewhere, and in 1901 Daniel Kauffman accepted an invitation to serve in the West Union Amish Mennonite Church in Iowa. They remained there until 1913 when they followed their grown children who had moved earlier to Creston, Montana. Almost immediately after the Kauffman's arrival in Creston, they participated in the organization of the Mountain View Mennonite Church. He became the congregation's leading minister after Bishop Jacob Roth, who had lived in and served the community and a small group of Mennonites since 1903, left for Texas in 1916 or 1917.

Evangelistic concerns and the relative geographic isolation of the Mountain View Mennonite Church led Daniel Kauffman to invite Bishop Norman B. Stauffer of the Alberta-Saskatchewan Mennonite Conference to conduct a sixteen day series of Bible conference and evangelistic services in 1919.

Ill health prompted the Kauffmans to move, initially only for the winter of 1923-24, to California and subsequently to Clarence Center, New York. Before leaving, however, Daniel Kauffman was instrumental in having the Mountain View Mennonite Church become affiliated with the Alberta-Saskatchewan Mennonite Church.

The Mountain View congregation remained without a resident minister from the time of the Kauffmans departure until 1928, but benefited from fairly frequent visits by bishops and ministers of the Alberta-Saskatchewan Mennonite Conference. Mary (Steckly) Kauffman returned to live with her children at Creston after the death of her husband, Daniel Kauffman, in 1934.