Missouri has had Mennonites within its borders since 1860, when the first ones (Amish Mennonites) located on the western border of the state, below Kansas City in Cass County (near Garden City). In 1868 they organized the Sycamore Grove (MC) congregation, which in 1956 had 224 members. The next settlement was made in 1866-1868 in the Morgan County-Moniteau County area near Versailles and Fortuna. First to come were Swiss Mennonites from Berne, Indiana, and Polk County, Iowa, followed by others from Rockingham County, Virginia. In 1871 the settlement peaceably divided into two congregations, Mount Zion (Mennonite Church) and Bethel (General Conference Mennonite Church), with 54 and 131 members respectively in 1956. 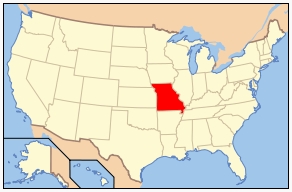 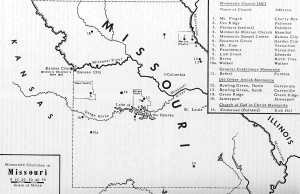 The third location to be settled was in northeastern Missouri, northwest of Hannibal in Shelby County and later in Marion County. The Mount Pisgah (MC) congregation, formerly called Cherry Box, was founded in 1868 by settlers chiefly from Sterling, Illinois; in 1956 it had 48 members. A daughter congregation, Berea (MC), was settled in 1895-1899 in the far south in Shannon County. In 1956 it had 25 members. A third small congregation in the Marion County area, Palmyra, founded by settlers from Lancaster County, Pennsylvania, in 1884, was dissolved in 1955, part joining the Pea Ridge congregation, which had been started about 1909 as a mission from Palmyra and in 1956 had 28 members.

In addition to the original settlements missions have been established at various places by the Mennonite Church (MC). The first was in Kansas City (Mennonite Gospel Center), dating from 1947, with 29 members. The larger Argentine church (MC) with 109 members, was on the Kansas side of the city. At Hannibal the Mission Church, with 76 members in 1956, was started in 1934. The three additional missions in central Missouri still in existence in 1956 (at Edwards, Warsaw, and Walker, started in 1939, 1949, and 1954) had a total of only about 30 members. The total membership of the Mennonite Church (MC) in Missouri in 1956 was 514.

The remaining Mennonites in Missouri consist of four Old Order Amish districts, with a total of 131 members, located in three widely scattered areas of the state (see map) and were of more recent origin. The Bethany Church of God in Christ, Mennonite congregation at Rich Hill along the Osage River, near the western border of the state, was organized in 1923; it had 93 members in 1956. The total Mennonite and Amish membership in the state in 1956 was 869. There are no Mennonite institutions in the state. -- HSB