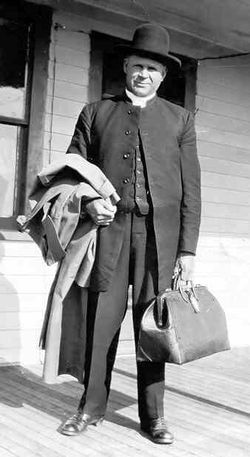 Norman B. Stauffer: minister and bishop of the Mount View Mennonite Church near High River, Alberta, was born 30 December 1871 in Waterloo, Ontario, and died 13 September 1927 at Aldersyde, Alberta. He married Elizabeth Otterbein who died 22 August 1914. They were the parents of twelve children, three of which died in infancy. On 1 August 1917 he married Melinda Snider of Waterloo. Norman Stauffer died of a stroke after only a few days of suffering, at the relatively young age of 56.

Norman Stauffer came to Alberta in 1900 to look for a suitable homestead, leaving his wife and family in Waterloo. He obtained work as a carpenter on a Canadian Pacific Railway construction gang, but also established contact with Elias and Catharine Bricker who had come west more than a decade earlier. He returned to his family in Ontario for the winter of 1900-01. On his trip west in 1901 he accompanied S. F. Coffman who had been sent west by the Ontario Mennonite Conference to help organize recently arrived Mennonite settlers in the territory which would become part of the province of Alberta later. Stauffer's family joined him in June of 1901 after he secured a farmstead five miles east of Aldersyde, Alberta.

Norman and Elizabeth Stauffer were charter members of the Mount View Mennonite Church when it was organized in 1901. At that organizational meeting he was chosen, by lot, and ordained as the minister of the new congregation. He was ordained as bishop in the Alberta-Saskatchewan Mennonite Conference in 1911. In that capacity he travelled a great deal, visiting and serving many of the congregations of the conference. He also met with many of the scattered families and small clusters of Mennonite settlers in Alberta. He participated in numerous Bible conferences and was active in evangelistic work. His preaching style was simple, direct, forceful, and often emotional. He was an influential and respected leader in his home congregation and in the conference.