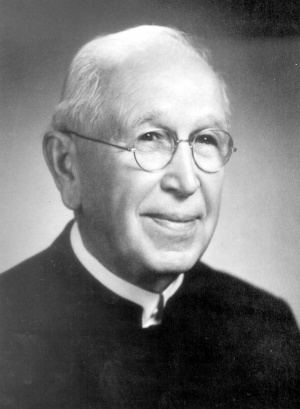 Samuel Frederick Coffman: pastor in Vineland and a leading bishop in the Mennonite Church in Ontario; born on 11 June 1872 near Dale Enterprise, Rockingham County, Virginia, the son of Preacher John S. and Elizabeth J. (Heatwole) Coffman. On 20 November 1901 he married Ella Mann (d. 1935) of Elkhart, Indiana. They had five children, all born in Vineland: John, Magdalena, David, Barbara, and Ellen.

Samuel spent most of his school years in Elkhart County, Indiana, where his family had moved in 1879. He graduated from the Elkhart High School in 1890, one of the first Mennonite high school graduates in the Middle West. He attended the Moody Bible Institute 1894-1895 and for six months in 1897-1898. From 1890-1894 he worked for the Mennonite Publishing Company in Elkhart. He was converted at meetings held in Elkhart by his father and was baptized on 26 May 1888. He was elected superintendent of the Elkhart Mennonite Sunday school on 28 December 1893. In 1894-1895 he served in the Mennonite Home Mission in Chicago. Here he was ordained to the ministry on 21 April 1895, by John F. Funk of Elkhart; he was ordained bishop in Vineland, Ontario, on 26 September 1903.

Coffman served widely in his denomination beyond the borders of his own congregation and conference. He was moderator of the Ontario Conference in 1931-1934, and moderator of the General Conference in 1911 and 1933. He also served as secretary of the General Conference for a time. He was a member of the following General Conference committees: Music Committee from its beginning in 1911 until 1947; Peace Problems Committee 1925-1949; Historical Committee from its inception in 1911 and its chairperson from 1911 until 1947; General Sunday School Committee from its beginning in 1915 until it was incorporated into the Commission for Christian Education and Young People's Work in 1937. He served for a time on the Missions Committee of the Mennonite Board of Missions and Charities. He served on the Mennonite Board of Education from its inception in 1905 until about 1944, serving as secretary for about 20 years. He also served on the Publication Board and its Publishing Committee. He was the founder and served as principal of the Ontario Mennonite Bible School in Kitchener, Ontario, 1907-1947. He was editor of the Bible study department of the Christian Monitor from the beginning of its publication in 1909 until 1953. During his service as hymn editor of the Music Committee the following books appeared at Scottdale, Pa.: Church and Sunday School Hymnal Supplement (1911); Life Songs (1916), of which he was co-editor; Church Hymnal (1927); Songs of Cheer for Children (1928); and Life Songs No. 2 (1938), of which he was editor.

He served as pastor of the Moyer congregation in Vineland from 1902 until he died in 1954, and as bishop of the Niagara District from 1903. He was a charter member of the Nonresistant Relief Organization in Ontario, organized in 1918, and its secretary 1920-1950. In 1918 he was appointed the special correspondent with the Canadian government regarding military service and the immigration of the Russian Mennonites. He was associated with the Canadian Mennonite Board of Colonization 1922-1944 and actively aided the immigration from Russia to Ontario 1922-1925. In his earlier ministry he was widely used in Bible conference and evangelistic work. In 1901 on a commission from the Ontario Conference he organized a number of congregations and ordained ministers and deacons in Alberta. He died in Vineland on 28 June 1954. He was one of the outstanding figures of the Mennonite Church (MC) throughout his more than half-century of service in the ministry, and made an extraordinary and lasting contribution to it, always a man of vision, constructive and peace-loving, widely beloved and highly regarded.

Papers at Mennonite Archives of Ontario