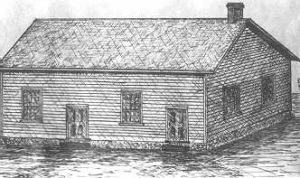 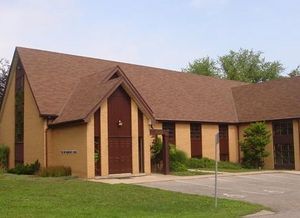 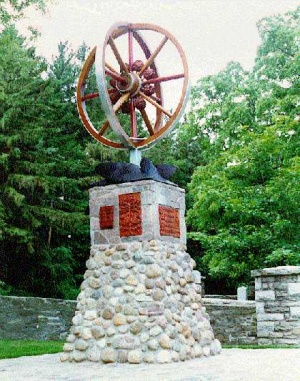 Samuel F. Coffman was longtime leader of the congregation from 1903 until his death in 1954. Although the congregation experienced a number of losses in the late 20th century, it experienced revival and growth when a number of "Russian Mennonite" families began to attend this church founded by some of the earliest Mennonites to come to Canada from Pennsylvania. The language of worship is English; the transition from German occurred in the 1890s.

The bicentennial of Mennonites in Canada in 1986 culminated in a celebration at First Mennonite Church with the unveiling of a Bicentennial Monument.

Coffman, S.F. "The one hundred and fiftieth anniversary of the founding of the Mennonite Church at Vineland, Ontario." 12 pp. MAO.

Moyer Mennonite Church (Mennonite Church), at Vineland, Ontario now known as The First Mennonite Church of Vineland, was organized in 1801, by settlers from Bucks County, Pennsylvania. Six families came in 1786, eight families came in 1799, and by the close of 1800 there were some 60 persons in this part of Ontario. At the time of organization, an estimated 100 persons constituted the congregation. With the permission of the Franconia Conference Valentine Kratz was ordained minister in 1801 and John Fretz deacon. A log schoolhouse was used at first for the services. In 1810 a site was provided on the farm of Jacob Moyer for the first meetinghouse and cemetery. Samuel Moyer was the first schoolteacher. Jacob (d. 1833) Moyer became minister in 1802, bishop in 1807. Shortly before his death the stone wall bounding the present cemetery was built.

The Moyer congregation reached its greatest strength by 1850. Other bishops who served "The Twenty," as it was called, were Jacob Gross, ordained in 1834, and Dilman Moyer, ordained in 1850. Other ministers were Jacob Moyer, Jr., Abraham Moyer, Daniel Hoch, Abram K. Hunsberger, Daniel Honsberger, John F. Rittenhouse, and Abraham Rittenhouse. The congregation experienced an unusual amount of difficulty through misunderstandings and schisms. First Bishop Jacob Gross withdrew to the Evangelical Association about 1849, with a considerable following. Daniel Hoch left in 1849 and he and his followers used the church east of the pond at Jordan. For a time he co-operated with the John H. Oberholtzer group in eastern Pennsylvania, then later with the Mennonite Brethren in Christ (MBC). The MBC movement of 1874-75 took several members. Again, the division of 1889 separated several families of the Old Order Mennonites, who worshiped in a frame building at the west side of the cemetery grounds. Sunday school was conducted in the late 1840s, with lessons from the New Testament, for the preservation of the German language. The ministry of more recent date consisted of S. F. Coffman, who was ordained in Chicago in 1895, came to Vineland shortly thereafter, and was ordained bishop in 1903. He was followed by Wayne North as minister, ordained in 1955. The membership now (1955) numbers 74.