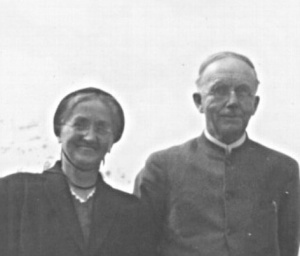 Joseph Cober ("J. C.") Fretz: historian and church leader; born 25  September 1885 in Markham, Ontario to Manasseh and Mary Ann (Cober) Fretz. He was the oldest child in a family of eight sons and four daughters. On 18 March 1918 he married Martha Reesor (1888-1960). They had two sons and two daughters. Joseph died 22 August 1956 of a heart attack while in his car. He was buried in the Wideman cemetery in Markham, Ontario.

In addition to the usual primary and secondary school education in Markham, Joseph Fretz obtained normal school training and graduated from Goshen College in Indiana. He taught in public primary schools in Ontario for about twenty years at a variety of locations, including Scotia Junction, Rainham Centre, the Rittenhouse School in Vineland, Merriton and at Baden.

As a layperson Fretz held a surprising number of positions within the Mennonite Conference of Ontario. He promoted Summer Bible Schools in the Mennonite community. He served as field secretary for the Sunday school conference from 1931 to 1946, as secretary of the Mennonite Mission Board of Ontario from 1941 to 1952, and as the conference's historian from 1941 until his death. He was appointed as historian at a time that historical records of the Mennonite Conference of Ontario began to be gathered at the Golden Rule Bookstore, including records that had been deposited at the Ontario Archives by L. J. Burkholder.  In his role as historian, Fretz wrote at least 40 articles on Ontario themes for the four-volume Mennonite Encyclopedia and contributed a thoroughly researched article on the history of Mennonites in Welland County, Ontario for the Mennonite Quarterly Review.

In December 1953 Joseph Fretz was ordained as a deacon for the Shantz Mennonite Church near Baden, Ontario. However, his major contributions to the church were through his conference assignments and as manager of the Golden Rule Bookstore. In these roles he provided quiet leadership while interacting with many persons both within and outside the Mennonite community.