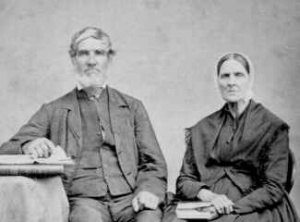 Hoch was a farmer, and had no formal education beyond the elementary grades. On 22 May 1831 he was chosen by lot and ordained by Bishop Jacob Moyer as minister in the local Mennonite Church (MC) congregation at "The Twenty." According to his later testimony, at the time of his ordination he was a lost sinner, and believed for some years he had committed the "unpardonable sin." He eventually had an experience that gave him assurance of his salvation sometime before 1838 when he "became by grace assured of the remission of all my sins."

With his new understanding of salvation, Daniel Hoch began to preach a message to his congregation of renewal through personal conversion. With this revitalized message Hoch also introduced prayer-meetings, family worship and prayer before meals. There is relative silence about Hoch's ministry into the 1840s, though obvious tension existed within the body of pastoral leaders at the Twenty, which now also included Bishop Jacob Gross (1780-1865, ordained after the death of Bishop Jacob Moyer, Sr. in 1833) and two of Daniel’s stepbrothers, Preachers Dilman and Abraham Moyer. Gross and Hoch, along with Deacon Jacob Albrecht, favored incorporation of some renewal forms learned from the Evangelical Association, though Hoch remained a staunch Mennonite in his overall thought.

The two factions in the congregation began to worship separately in 1848, making full use of the three available local meetinghouses. At the time of the Canada Conference annual conference meeting in May 1849, which was held at The Twenty, Benjamin Eby announced the silencing of Daniel Hoch, Bishop Jacob Gross and Deacon Jacob Albrecht. Jacob Gross and a portion of the congregation soon joined the Evangelical Association, a step away from the Mennonites that Daniel Hoch completely rejected. Hoch did not favor use of the mourners' bench or any form of open communion. Daniel Hoch's relationship with his former colleague Dilman Moyer became bitter, and was not resolved before their deaths in the 1870s.

After a failed reconciliation with the conference, Daniel Hoch led the formation of the New Mennonite Church of Canada West. He became associated with John H. Oberholtzer, who ordained Hoch as a bishop on 5 October 1851. Daniel Hoch was an early supporter in the formation of the General Conference Mennonite Church, and chaired the 1861 session of that conference. He also maintained cordial relations with the Evangelical Mennonites, who split from Oberholtzer's East Pennsylvania Mennonite Conference in 1857.

In the 1860s and early 1870s Daniel Hoch’s own relationship with the New Mennonite conference suffered. He did not attend all the annual conferences, and on occasion the conference reprimanded him for the abrasive language used in his public writings. He was still, however, acknowledged as an important leader in Mennonite renewal, and his support was sought by renewal leaders in other Mennonite communities. Eusebius Hershey, Jonas Schultz, David Gehman and others of the Pennsylvania-based Evangelical Mennonites sought Hoch’s endorsement and visited him whenever traveling to Canada. Even John H. Oberholtzer visited Hoch in his home as late as 1875.

In 1869 one last effort was made at reconciliation between the New Mennonite Church and the Canada Conference. The plan was not accepted, and soon other renewal activity in Ontario overtook events, and hopes for reconciliation were not revived. Without Daniel Hoch’s intransigent position that his relationship to Dilman Moyer needed resolution before any conference reconciliation, it is quite likely reconciliation would have taken place at this time, at least in Waterloo County. This would have had an unknown impact on subsequent renewal efforts within the Ontario Mennonite community. The New Mennonite Church merged with the Reforming Mennonite Society in 1875 to form the United Mennonites of Canada, Michigan, Indiana and Ohio.

Daniel Hoch’s own New Mennonite congregation at Jordan gradually dwindled. His older brother and co-minister, Jacob, died in early 1876, and no other New Mennonite preacher remained in the community. Eventually Daniel Hoch’s poor health ended regular New Mennonite services at The Twenty, probably in the early 1870s.  By the time Hoch died on 13 August 1878, he appeared to be isolated from his church community. His funeral was conducted by Evangelical Association ministers, a supreme irony considering his explicit personal rejection of Evangelical Association theology at the time of the division in 1849.

Despite his abrasive style in dealing with conflict, Daniel Hoch was a leader steeped in Mennonite theology, who tried to embrace a level of spiritual renewal that would serve a Mennonite church he believed was weakened by a focus on tradition and dress regulations.