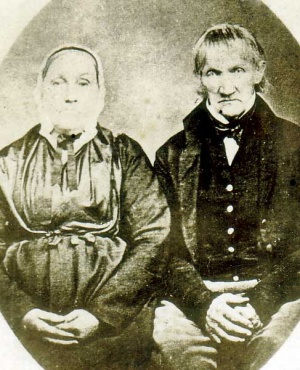 Jacob Gross: farmer and minister; was born 22 December 1780 in Plumstead Township, Bucks County, Pennsylvania to Jacob Gross (1743-12 December 1810) and Maria Krall Gross (ca. 1752-10 February 1816). He was the fourth son and fifth child in a family of seven children (some records say six children). His father immigrated to Pennsylvania from Germany about 1763, and became a minister and bishop at the Deep Run Mennonite Church. Four of Jacob (Sr.) and Maria Gross's sons became Mennonite ministers. Jacob, Jr. moved to Upper Canada soon after the War of 1812 and lived on a farm near Beamsville. There were strong connections to the community at The Twenty; Jacob Sr. had written the 1801 letter from Pennsylvania authorizing the settlement to ordain a minister without the presence of a bishop. On 17 December 1817 Jacob Jr. married Anna Moyer (17 July 1799-22 June 1827); they had five children. On 23 August 1830 he married Salome Moyer (9 September 1796-10 April 1878); they had three children. Jacob Gross died 25 November 1865.

Jacob and Anna Moyer worked their farm in the Beamsville area, an apparently were prosperous. In 1833 Jacob was ordained as a minister for the congregation at The Twenty; he served with Daniel Hoch. He was likely ordained by Benjamin Eby after the sudden death of Bishop Jacob Moyer in Pennsylvania in June 1833, but the exact date of the ordination is unknown. In 1834 he was ordained as bishop, again by Benjamin Eby. In 1842 the ministerial team was joined by brothers Abraham Moyer and Dilman Moyer, both sons of the late Bishop Jacob Moyer. The congregation thrived for a time, but early in the 1840s some members began to be attracted by the outreach of the Evangelical Association.

Jacob Gross and Daniel Hoch both were receptive to aspects of the spiritual renewal movements that were influencing the Mennonite community, though they differed in the degree of their openness. They encouraged Sunday school, family worship and evening prayer meetings in which leadership was sometimes taken by lay persons. Hoch, however, was concerned to keep the reforms "Mennonite," and rejected Gross's greater openness to inclusion of members of other denominations in the prayer meetings and services held at the meetinghouses. Indeed it appears Jacob Gross opened his home to ministers of other denominations in a way that would have offended more traditional members. The Canada Conference cautiously approved prayer meetings in 1847 if they were held "in an orderly manner." However the congregation at The Twenty divided in 1848 between the "praying" and "non-praying" parts of the church; the latter led by the Moyer brothers. Since there were three meetinghouses in the area, it was possible for each group to worship in peace. On the advice of Benjamin Eby, the two factions also held communion separately in fall 1848.

By some measures Jacob Gross failed as a Mennonite leader in the Niagara Peninsula. His congregation splintered, and he was often overshadowed by the more dynamic Daniel Hoch. However his life and the decisions he made reflected the religious turmoil that increasingly afflicted the Mennonite community in Upper Canada. He and Salome were buried at the Evangelical cemetery at Campden, Ontario.

Burkholder, L. J. A Brief History of the Mennonites in Ontario: Giving a Description of Conditions in Early Ontario, the Coming of the Mennonites into Canada, Settlements, Congregations, Conferences, Other Activities, and Nearly 400 Ordinations; 100 Pictures of Men and Churches. [Waterloo, Ont.]: Mennonite Historical Society of Ontario, 1986: 146-147, 290.

Fretz, A. J. A Genealogical Record of the Descendants of Christian and Hans Meyer and Other Pioneers: Together with Historical and Biographical Sketches, Illustrated with Eighty-Seven Portraits and Other Illustrations. Milton, N.J.: A.J. Fretz, 1896. http://www.archive.org/details/genealogicalreco00fret3 (accessed 16 February 2010): 112-114.