Benjamin Eby: pioneer Mennonite bishop of the Mennonite Church (MC) serving in Ontario. The eleventh child of Christian Eby and his wife Catharine Bricker, Benjamin was born in the old homestead on Hammer Creek, Warwick Township, Lancaster County, Pennsylvania, 2 May 1785. On 25 February 1807 he married Mary Brubacher. That spring he and his wife immigrated to Waterloo County, ON, arriving at what was later Berlin (now Kitchener) on June 21. He was ordained as minister (MC) on 27 November 1809 and as bishop on 11 October 1812. In 1813 his dream of having a meetinghouse was realized with the erection of a log structure of modest dimensions, the first building erected solely for religious worship in Waterloo County. The congregation had not fewer than 150 members. Possibly as early as 1815 Benjamin Eby built a frame annex to the log church, with a movable partition between it and the main building. This annex served as a schoolhouse of which he was for many years the teacher. At the same time he carried on his farming. His farm was lot 2 of the Beasley Tract, comprising a large part of the East Ward of the modern city of Kitchener. To Benjamin and Mary Eby were born eleven children. In August 1834, Mary died of cholera. Some time after her death Benjamin married the widow of Abraham Erb, the founder of Waterloo. On 28 June 1853, Eby died.

To sketch the life of Benjamin Eby is to consider the man, his work, his interests, and his influence. As a farmer he seems to have been successful. He was at least generous with his money, as the few remaining records of his financial transactions indicate. In 1816, when the church purchased an acre of land to add to its holdings, he donated an additional three quarters of an acre. All this is now part of the property of First Mennonite Church of Kitchener. Between 1825 and 1830 two men, John Hoffman and Samuel Bowers, wanted to establish a furniture factory. Appealing in vain to various sources for land, they came finally to Bishop Eby, who readily made land available to them. This too was a gift. The third transaction was in connection with the founding, in 1835, of the first newspaper in inner Canada, the Canada Museum, by Henry W. Peterson. Benjamin Eby not only encouraged this enterprise by word but purchased two shares of stock at $40.00 each, a larger risk than anyone else, apart from Mr. Peterson, was willing or able to take. Again, in 1836, he donated $16.00 toward the building of a cemetery wall, the next highest gift being $4.00. Relatively small as those sums are today they were important in those pioneer days. Judged in relation to his times and his contemporaries all these transactions establish Benjamin Eby as a substantial farmer in his community. Of his occupation as a preacher only a few recorded comments survive. H.W. Peterson, publisher and Lutheran lay preacher, says in his diary: "Stayed all night at Benjamin Eby's, went with him and his family to the meeting or church. He prayed and preached well. He is a good man." An anonymous writer in the Berlin Daily Telegraph for May 19, 1906, says: "His sermons were full of good sense, very intelligible, lying parallel with the understanding of attentive hearers." A tradition has it that there were invariably tears in his eyes when he entered the pulpit on a Sabbath morning. For many years, from 1818-19 to the early 1840's, he was also the community schoolmaster. In this period he wrote two spelling or reading books, Neues Buchstabir- und Lesebuch (1839) and Fibel (1843). He also wrote a work on Mennonite faith and history entitled Kurzgefasste Kirchen-geschichte und Glaubenslehre der Taufgesinnten Christen oder Mennoniten (1841). He was most likely the compiler of the Gemeinschaftliche Liedersammlung (Berlin, 1836), which was long used in Ontario. Thus he was farmer, teacher, preacher, and author. As might be expected, his interests went beyond his own community. He corresponded with European Mennonites and published some of the letters received in Briefe an die Mennonisten Gemeine in Ober Canada (1840) and Zweyter Brief aus Dänemark (1841).

The physical man must be noted briefly. There was a tradition that he was frail. Aus 'em Bennie gebts ka Bauer, er muss Schulmester werre. (Bennie will never make a farmer, he must become a schoolteacher.) Yet he made two journeys to Canada on horseback through the wilderness, hewed for himself a home, prospered substantially, and was unusually active in church and community affairs. One of his coats, seen by the present writer, would indicate that he was about five feet, six inches tall, weighing possibly 150 lbs. 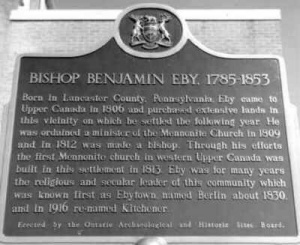 Up to 1833 the Waterloo County settlement was known as "Ben Eby's" or "Ebytown," thus establishing Eby as the leading citizen of his community. With the arrival of increasing numbers of German non-Mennonites, the name of the settlement was changed in 1833 to Berlin. The record of his influence and activities bears eloquent testimony that he had both a keen sense of civic and denominational responsibility. In his account of Benjamin Eby's funeral, written for the July 7, 1855 issue of the Guelph Advertiser, H.S. Peterson calls him "an Israelite in whom there was no guile, and that he was sincerely pious, humble, exemplary, practical, and non-sectarian, and eminently successful in his day and generation." The anonymous friend in the Daily Telegraph (Berlin, ON, 19 May 1906) says: "He was a person of unblemished character. Naturally of a sweet and gentle disposition, friendly and obliging, always ready to serve his friends in any way that he could by his interest and authority. This he did freely and generously, not proud or haughty, but serious in giving good counsel, and greatly esteemed for his integrity by all ranks and denominations. All very much desired his company and wholesome conversations." Eby's Kurzgefasste Kirchengeschichte of 1841 had many reprints: Lancaster 1853; Elkhart 1868, 1879, 1901; Kitchener 1919. His Neues Buchstabir- und Lesebuch of 1839 was also often reprinted: Berlin, ON 1842, 1847; Elkhart 1869, 1871, 1882, 1896, 1909.