Mennonite settlement began in Waterloo County in the spring of 1800 when Joseph Schoerg and Samuel Betzner, with their families, arrived on the banks of the Grand River in what was then Upper Canada, from Franklin County, Pennsylvania. They were the first white settlers in this county. The settlement grew steadily until by 1828 there were 1,000 Mennonite members and 2,000 hearers. The land was taken from the Beasley Tract, this being 94,012 acres of Six Nations Indians' lands in the Grand River Basin purchased from them by one Richard Beasley through the government of Upper Canada which acted as trustee. In November 1803 an agreement was signed between the German Company on the one hand, representing the Mennonites, and Beasley, on the other hand, for the purchase of 60,000 acres of his land for the sum of 10,000 pounds. On this land there was a mortgage of $20,000. Precisely when this fact was discovered is a matter of some doubt. Suffice it to say that Joseph Sherk and Samuel Bricker went to Pennsylvania to procure this money. In April 1803 a joint stock company was organized in the home of "Hannes" Eby in Lancaster County to raise the mortgage money. This was done within two years, for on 29 June 1805 the deed for the 60,000 acres was executed in the Registry at Berlin, Ontario. Mutual faith and co-operation motivated this transaction. Most likely it was "Hannes" Eby who persuaded his brethren in Lancaster to aid their brethren in Waterloo. Most of the early settlers came from Lancaster County, Pennsylvania, and some from the Franconia area - Bucks, Montgomery, and (a few) Franklin counties. 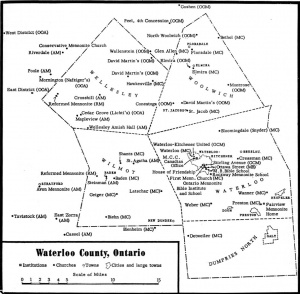 In 1957 there were 18 active Mennonite Church (MC) congregations in the county with a membership of 2,899. Dates given are those of the erection of church buildings, as closely as can be determined, although in many cases services were held in homes prior to the building of a church. Names of congregations are listed as in the Mennonite Yearbook, being both family and place names. The former are the survival of the pioneer custom of naming a church after the family from whose land the property was secured, either by purchase or donation. These congregations are First Mennonite, 1813; Snyder (Bloomingdale), 1826; Wanner (Hespeler), 1829; Detweiler (Roseville), 1830; Geiger (New Hamburg), 1831; Cressman (Breslau), 1834; Latschar (Mannheim), 1839; Blenheim (New Dundee), 1839; Weber (Strasburg), 1840; Shantz (Baden), 1840; Hagey, now called Preston, 1842; St. Jacobs, 1844; Waterloo (David Eby), 1851; Biehn (New Hamburg), 1865; Floradale, 1896; Baden, 1913; Elmira, 1924; Hawkesville, 1950. With the exception of Kitchener, which is 70 per cent urban and 30 per cent rural, and Waterloo, which is 50 per cent of each, these are all rural congregations. Each of these churches, except Hawkesville, has its own cemetery.

Three schisms resulted in the formation of other Mennonite groups. The first was that of the Mennonite Brethren in Christ in the early 1870s. This was a division on the progressive side, the points at issue being mainly the conducting of prayer and revival meetings and Sunday schools. In 1953 this group had 5 congregations in the county with a total of 666 members. In 1948 they changed their name to United Missionary Church, thus abandoning entirely the name Mennonite. In the late 1880s occurred the second division, this time on the conservative side, when the Old Order (Wisler) Mennonites seceded. They are now subdivided into three groups, namely, the original Old Order, the Waterloo-Markham conference, and the David Martin group. The difference in these factions concerns the ownership and use of modern inventions, together with some points of attire. No points of faith are involved since all adhere to the Dordrecht Confession of 1632. Of these three factions in the late 1950s, the first had five congregations with a total of 1,061 members, the second five congregations and 630 members, and the third three congregations with 116 members, a total of 1,807. None of these factions hold revival meetings. Instead a public invitation is given each year from their pulpits. Those accepting the invitation are then instructed in the Dordrecht Confession and in their own group discipline. The third division occurred in the First Mennonite Church of Kitchener in 1924 and resulted in the formation of the Stirling Avenue Mennonite Church (General Conference Mennonite [GCM]), which in 1957 had 476 members.

In the late 1950s the remaining Mennonite groups in the county were the Amish Mennonites, Reformed Mennonites, and the "Russian" Mennonites. The Amish Mennonite settlement was located in Wilmot Township. It was begun in 1824 by Christian Nafziger, who came from Bavaria to America and arranged with Governor Maitland of Upper Canada for the purchase of lands in this township. In 1826 the Ropp family emigrated from Alsace and settled in Wilmot Township. Thus the Amish Mennonites are of both Bavarian and Alsatian origin. Reasons for emigration were desire for new land and exemption from military service. Typical family names among them are Nafziger, Steinman, Bender, Ropp, Lichty, Jantzi, Schwarzendruber, Roth, Jutzi, Mayer, Schultz, Wagler, Gascho, Miller, and Brenneman. In 1957 there were five congregations of this group in Waterloo County and five just outside in Perth and Oxford, all those in Waterloo County being in the Ontario Amish Mennonite (AM) Conference. The total membership in the county was 1,103. The main difference between them and the MC group was in social customs. In addition to this main group of Amish Mennonites there was a small congregation of Old Order Amish in the county with 140 members. They worshiped only in private homes. In 1956 a schismatic group at Millbank under Valentine Nafziger withdrew from the Ontario AM conference to form the Bethel Conservative Mennonite Church.

The Reformed Mennonites are a small, closely knit group with two meetinghouses (Hostetler's near New Hamburg, 1844, and Kingwood near Wellesley, 1850) and 77 members in the county.

Two Mennonite churches were formed in Waterloo County by emigrants from Russia in 1922-25, the Waterloo-Kitchener United Mennonite Church (GCM) with 407 members, in the city of Waterloo, and the Kitchener Mennonite Brethren Church, with 405 members, in Kitchener. In both, services were still conducted in German by the late 1950s. The other emigration from Russia, that of the 1870s, left no churches in Waterloo County, but Jacob Y. Shantz, then a leading member of the Mennonite Brethren in Christ, was the guiding spirit in settling these people in the Red River Valley in Manitoba, and the whole movement received solid financial support from the Mennonites of Waterloo County.

In the late 1950s the Mennonites had the following institutions in Waterloo County: Rockway Mennonite School (MC, 1945) and Golden Rule Bookstore (MC, 1938), both in Kitchener, Fairview Mennonite Home (MC, 1943, 1956) in Preston, and the Mennonite Brethren Bible School in Kitchener (formerly Virgil Bible School). The Mennonite Central Committee Canadian headquarters office had been in Waterloo since 1948 (1944-48 in Kitchener). The United Missionary Church (UMC) established Emmanuel Bible College here in 1940.

In the late 1950s the Mennonites of Waterloo County were chiefly an agricultural people. There was, however, no communal organization to aid in the purchase of land. Most Mennonites who came to the cities of Kitchener and Waterloo were industrial workers. The percentage of business and professional people was small. The Mennonites (MC) had a fire insurance organization called the Mennonite Aid Union, founded in 1867. Rates were low and membership limited to adherents of this branch of Mennonites and their families. Waterloo County was the first Mennonite community of any real size in Canada, and in the late 1950s contained more Mennonites than any other county in the Dominion, 7,836 members (not counting the UMC), and has had and continues to exert a marked influence on Mennonite religious and cultural life.

Eby, Ezra E. A Biographical History of Waterloo Township and Other Townships of the County, Being a History of the Early Settlers and Their Descendants Mostly all of Pennsylvania Dutch Origin, and also Other Unpublished Historical Information Chiefly of a Local Character, 2 vols. Berlin, Ont., 1895-96.