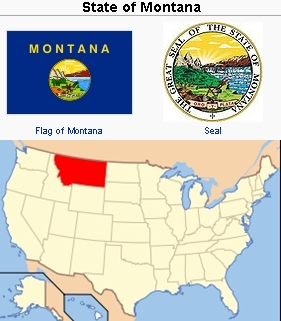 Montana was admitted to the Union in 1889. In 1955 the total Mennonite membership in the state was over 800. Soon after 1900 Mennonites began to arrive as individuals and as family groups. The first congregation established was Mountain View (Mennonite Church), founded in 1903 near Creston not far from Kalispell in the far northwest corner by Amish Mennonite settlers from Oregon. In 1955 it had 98 members. Old Order Amish families settled in Dawson County in 1903, and General Conference Mennonites in 1906.

The Old Order Amish lost several members through migration; the rest joined the Red Top Mennonite (Mennonite Church) Church near Bloomfield, Dawson County, which was organized in 1917. A church was built by this group in 1936 and enlarged in 1952. The membership of the church in 1955 was 59. Some members of the Red Top Mennonite Church moved to the nearby city of Glendive and organized the Little White Chapel congregation in 1948. It acquired a church in 1949, which was remodeled in 1952. The membership in 1955 was 39. Another small Mennonite (MC) group was reported at Coalridge, Sheridan County, with 10 members in 1955, organized as a congregation in 1916.

General Conference Mennonites who settled in Dawson County in 1906 organized the Bethlehem Mennonite Church at Bloomfield in 1910. The first meetinghouse was built in 1912 and was enlarged several times. Membership of this group was 155 in 1955. Several families of this group settled in Glendive, building their own house of worship in 1948. In 1950 it became an independent congregation, with a membership of 60 in 1955.

General Conference Mennonites and Mennonite Brethren settled along the Missouri River at Frazer and Wolf Point and north as far as Lustre and Larslan in eastern Valley County during the early years of World War I (1915-16). The Northern District (General Conference of Mennonite) sent workers to the Lustre-Bethel area from 1917 on. In 1924 the groups at Lustre and Volt organized as the Bethel Mennonite Church. This congregation numbered 84 members in 1955. The Bethel Mennonite Church at Wolf Point is first reported in 1935. In 1955 this congregation totaled 83 members.

The Mennonite Brethren organized a church at Lustre in 1917, erecting a church building in 1923. A group at Volt also organized in 1917 but has been affiliated with the Lustre group. The total Lustre MB congregation numbered 133 in 1952. The group at Larslan was organized in 1945, and in 1952 reported a membership of 37. Small groups of Mennonite Brethren existed for brief periods at Chinook, Whitefish, Hydro, and Poplar.

The Evangelical Mennonite Brethren were also represented in the original settlement of the community about Lustre. This group was organized in 1917, building its first meetinghouse the same year, and a new church ten years later. In 1954 its total membership was 103.

All Mennonite groups in Montana passed through a particularly painful crisis during World War I. The use of German was prohibited in the church services and the minister at the Bethlehem Mennonite at Bloomfield was abducted and held prisoner under threat of being lynched. (See Mennonite Life, October 1952.)

One institution is being sponsored in Montana on an inter-Mennonite basis, viz., Lustre Bible Academy.

The General Conference Mennonite Church established extensive mission work among the Cheyenne Indians on the Tongue River Reservation in Southwestern Montana. This was begun in 1904 by Mr. and Mrs. G. A. Linscheid, followed by others, including Rodolphe and Marie Petter in 1916. Churches were maintained at Busby , Lame Deer, and Birney with a total membership of 283 in 1950.

In 1952 there were 11 Hutterite Bruderhofs in Montana, with a total population of 919. The four Dariusleut Bruderhofs, settled in 1935 and 1945-1947, were located near Lewistown, the seven Lehrerleut Bruderhofs, all settled in 1945-1950 mostly between Choteau and Valier, with one almost at the Alberta border near Sweetgrass, and south of Augusta. By 1955 an additional Lehrerleut Bruderhof was settled near Cut Bank, almost at the Alberta border. (See article Hutterian Brethren, with maps.) -- John F. Schmidt

Since 1955 two congregations (Bethel, at Wolf Point, and First Mennonite in Glendive) have withdrawn from the General Conference Mennonite Church (GCM) and become community Bible churches. The Bethel congregation at Lustre disbanded on 13 October 1974. The Northern District Conference (GCM) began planting a congregation in Billings in 1983. The White Chapel Church (Mennonite Church) in Glendive assumed GCM and MC dual affiliation in 1987. The Red Top (MC) and Bethlehem (GCM) congregations near Bloomfield have been served by the same pastor during part of the 1980s. The Mennonite Brethren (MB) have three congregations in the Wolf Point-Lustre-Larslan area in 1987. The Evangelical Mennonite Brethren (Fellowship of Evangelical Bible Churches) continued with one congregation (Lustre) in 1987. Total Mennonite membership in Montana has declined to slightly more than 750 members in 1987.

The Lustre Bible School begun in 1928 with 25 students, has been known as Lustre Christian High School since 1978. It had 45 students, 1986-1987. The Beacon Bible Camp near Frazer and the Eastern Montana Bible Camp northeast of Bloomfield were supported and used by area Mennonite churches.

The only Amish settlement in the state was located at Rexford (one church district, or congregation). In 1982 the number of Hutterian Brethren colonies in Montana had increased to 31. They were still located mostly north, south, and west of Great Falls. -- O. J. Wall / Reynold Sawatzky

Rempel, G. S. A Historical Sketch of the Churches of the Evangelical Mennonite Brethren. Rosthern, 1939.