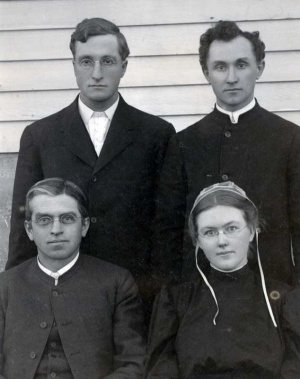 The school, located near Hesston, Kansas, was the dream of Pennsylvania immigrants of Swiss origin who had begun arriving in Harvey County in 1880. Though Bethel College opened its doors in 1893, the cultural gap between the General Conference Mennonites and the "Old" or MC Mennonites was too broad to bridge.

Conversation about a school west of the Mississippi River had begun at least as early as 1902 when Elkhart (Indiana) Institute was in the process of becoming Goshen College. When neither funding nor location materialized for a second school, the conversation in Indiana died. But it refused to die in Kansas. It was the topic of conversations around dinner tables, across line fences, and on meetinghouse grounds. 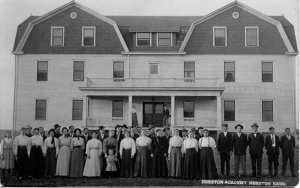 A Sunday afternoon discussion in the T. M. and Lizzie (Hess) Erb home with the Sam and Anna (Smith) King as guests led to official action in the fall assembly of the Kansas-Nebraska Mennonite Conference in Cheraw, Colorado on 18 October 1907. The delegates resolved that a school specializing in Bible training would, in the words of Anna Smith King, "advance the cause of Christ."

Moderator T. M. Erb took the resolution to a November meeting of the Mennonite Board of Education (MBE) of which he was a member. The MBE endorsed the proposal and charged Erb with the task of choosing a location, a principal, and raising the money to build and launch the school.

Of six locations considered Hesston was chosen. It was centrally located among four congregations—Pennsylvania at Zimmerdale; Spring Valley near Canton; West Liberty near Inman; and Catlin near Peabody. Hesston business leaders, including co-founder Abraham Lincoln (A. L.) Hess, had made the best offer of land and cash pledges.

Then vision was transformed into reality. It was first an academy or high school with strong Bible, music and teacher education curricula. In 1915 a year of college courses was added and by 1918 Hesston offered a four-year bachelor’s degree.

Believing that the Mennonite Church was too small to support more than one four-year college, the MBE ordered Hesston to discontinue its bachelor’s degree curriculum and to focus on academy and junior college programs. Hesston granted its last bachelor's degrees in 1927.

However, in 1928 Hesston offered a four-year Bible program believing the needs in the church west of the Mississippi required it. In 1942 Hesston, in cooperation with Goshen College, offered a bachelor’s of theology degree. In 1945 a pre-nursing program was designed with students finishing their training at schools of nursing at Bethel Deaconess in Newton, Kansas or at the La Junta, Colorado, and later at the Kansas City General Hospital 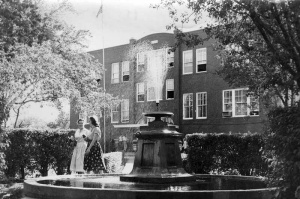 After nearly 50 years of persistently avoiding intercollegiate athletics, Hesston College entered the world of interscholastic competition in 1956. In the same year the college farm, in operation since 1913, was discontinued. In 1960 a board of overseers was appointed to assist the MBE in the college’s governance and policy development.

Between 1963 and 1965, the academy which had enjoyed the state's highest rating was transferred to the Hesston public school district. Since 1909 the Mennonite school had been the only high school option in Hesston. With Mennonite high schools emerging in Oregon, Indiana and elsewhere, the academy was losing potential students. The Hesston community, wishing to avoid annexation by the consolidated schools of Moundridge and Newton, formed its own district. The class of 1963 was the last to graduate from the academy. After 44 years, Hesston academy was history. While divesting itself of the academy, Hesston College strengthened its junior college curriculum, winning North Central Association of Colleges and Schools accreditation in 1964. A parade through Newton and Hesston, led by the new high school marching band, marked the auspicious occasion.

After 11 years of offering pre-nursing courses, the Division of Nursing was established in the spring of 1966, and the first 21 nursing students were registered that fall. Success in nursing influenced the growth of career programs in the 1970s. Hesston's administration asked why Hesston should not "carry water on both shoulders." President Laban Peachey declared, "To say we cannot produce both good liberal arts and career programs together is not responsible, creative, or Christian."

Hesston added a dozen new programs in the next decade. Among them were aviation, business, electronics, and early childhood education, which survived the downsizing in the 1980s, and remained strong in 2009. Beginning in 1970 Hesston developed a general education program, which combined liberal arts education with small group process and person-centered learning. According to one MBE official, it was an "inspired" model.

Hesston tightened its belt due to declining demographics and the economic downturn of the 1980s. Seeking to serve the church and find a new marketing niche, Hesston launched the Center for Bible Study in 1977, followed by the Pastoral Ministries program in 1985. In the next decade it began such programs as youth ministries and computer information technology.

An ambitious Enhancing Excellence campaign launched in 1994 supported an equally ambitious building and remodeling program. The September 2008 dedication of the Friesen Center for the Fine Arts was the last of a series of building projects.

In its centennial year, 2009-10, students numbered about 440. Hesston students pursued a wide range of disciplines, including the liberal arts and pre-professional fields like pre-medicine and pre-engineering as well as career programs like nursing, aviation, pastoral ministries and air traffic control, among others. About 75 percent of Hesston students pursued further education, and about 10 percent entered a church-related service program immediately after graduation. More than 14,000 alumni started at Hesston and have gone everywhere. -- John E. Sharp = 2018 Update Hesston College celebrated its first century using as its theme, Living the Vision, with events scheduled during Centennial Homecoming Weekend, 25-27 September 2009. While it sought to build on the vision of its founders, and to dream new dreams for its second century, it continued its stated mission: Hesston College, the two-year college of Mennonite Church USA, educates and nurtures each student within Christ-centered community, integrating thought, life, and faith for service to others in the church and the world. -- John E. Sharp

With a focus on meeting students’ needs, Hesston College began researching and exploring industry demands in the years following its centennial celebration.

In 2009, the college introduced Air Traffic Control as a track within the Aviation program. The program earned Federal Aviation Administration (FAA) Collegiate Training Initiative status in 2010, one of only 36 programs in the country and the only program in the state of Kansas to be FAA approved.

In 2015, the college added a bachelor of science in nursing degree (BSN) in response to a 2010 report from the Institute of Medicine which set a national goal that 80 percent of the nursing workforce would have a BSN by 2020. In January 2017, the college added an RN to BSN track for nurses who have their associates degree and want to take the next step to a bachelor’s degree. Following the 2016-2017 year, the college discontinued the associates degree nursing program (ADN), and focused the program on the bachelor’s degree. -- Rachel McMaster

Hesston College (formerly Hesston College and Bible School) (Mennonite Church) developed from an appeal to the Kansas-Nebraska Conference in 1907 for a Mennonite Church school west of the Mississippi "in which Bible would be made a specialty." Many parents and church leaders of the early 1900s were ready to comply with the current trend toward general high-school attendance; they saw the need of fitting young people for positive living in church service and chosen vocations but they demanded the assurance that such training be received under Christian influences.

During its history the institution has held sacred this wish of its founders. The Bible department of 1909 began as a two-year course on a high-school level and continuously readjusted itself to fit the developing curriculum. In 1956 the college gave a  B.R.E. course on a four-year college level. By an agreement between the two colleges, effective 1942-1954, three years of the five-year Th.B. course offered at Goshen College Biblical Seminary could be given at Hesston for later transfer to Goshen.

The institution opened 22 September 1909 on a site adjoining Hesston, Kansas, an 80-acre donation by A. L. Hess. There were 21 students and four faculty members—D. H. Bender principal, J. D. Charles, J. B. Kanagy, Estella Cooprider—and one building, later a dormitory for high-school girls.

In 1914-1917 the Administration Building was added; in 1946-47 Hess Memorial Hall, an Auditorium-Gymnasium; in 1948-1952 the J. D. Charles Hall of Science and Arts; in 1954-1956 a chapel-church—Bible department building. An accommodating cluster of practical arts shops, dormitories, offices, health unit, home economics workrooms, and faculty homes grew up around these major buildings.

In 1909 the institution was an academy; during 1912-1913 it was state accredited; in 1915-1916 college work was first given. In 1918-1927 four years of college were given (a total of 29 B.A. graduates); in 1925 a junior college organization was substituted and is now accredited by the Kansas Board of Education and the University of Kansas. The curriculum of the 1950s offered the terminal courses in vocational education and the liberal arts program. In 1951-1952 the high-school department was admitted into the North Central Association.

The first faculty had four members, one with an M.A. degree. In 1953-1954 there were 27 members with 18 Master's degrees and three who have almost completed the work for Ph.D.'s.

In pace with the steady growth of the institution the area of its influence has widened. In 1909 the school opened with 21 students and the first graduating class in 1911 had five members. In 1951-52, 520 students of all grades were enrolled and 102 were graduated. Although most of the students come from the states west of the Mississippi, an increasing number of high-school students came from Ohio, Indiana, Illinois, Puerto Rico. Each year, too, there was a scattering of Canadians, African-Americans, and foreign exchange students from Europe or Asia.

A 1952 check on alumni vocations gave evidence that the institution kept faith with its founders. In church institutions and activities, Hesston College alumni were in front-line service. Ten were on the Goshen College instructional staff, 15 on the Hesston College faculty, three at Eastern Mennonite College, seven on the official staff at the La Junta Mennonite School of Nursing, and seven on the Mennonite Publishing House editorial staff.  In the foreign and home mission outposts—in India, Africa, Japan, South America , Puerto Rico—in Mennonite Central Committee services, and in pastorates and teaching positions in home congregations Hesston College alumni filled responsible positions.

The 1953-54 faculty signed this pledge to send to its constituency:

We, recognizing a divine call to serve on the Hesston College and Bible School faculty, dedicate all our energies to Christ and His Church to teach in harmony with, and nothing contrary to the doctrines of the Word and the historic principles of the Mennonite Church, to be active in leading students to deeper experiences with Christ so that they may respond to His call to fellowship and service, and to do our best to maintain a fervent spiritual and evangelistic atmosphere on the campus.