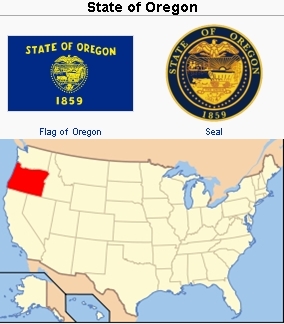 Oregon, a state in the United States since 1859, area 96,350 sq. miles, pop. 1,521,341 (1950); 3,594,586 (2004). West of the Cascade Range, where all the Mennonites were located in 1957, the climate is mild and moist. Except for the mission churches (Mennonite Church) in Portland, Grants Pass, Roseburg, and Blaine, all the Mennonite congregations were located in a strip 40 x 60 miles (65 x 100 km) extending north and south, largely in the Willamette Valley, with Salem, the capital of the state, at the center. Nine tenths of the 3,804 baptized Mennonites in the state lived within 30 miles of Salem. Half of them were farmers raising grain, vegetables, and fruit. A few were engaged in lumbering in the foothills of the Cascades, while many were engaged in business and industry.

The second Mennonite group to come into Oregon were the General Conference Mennonites (GCM), who established the Emmanuel Church near Pratum in 1890, with 239 members in 1957; Grace Church at Dallas, which had 343 members, was in 1932 essentially composed of members who withdrew from the Mennonite Church in the area. Grace Church at Albany, established in 1931, had 70 members. The remaining three smaller congregations were Calvary at Barlow (1944), with 121 members; Community Chapel at Sweet Home, with 62; and Alberta Community in Portland, with 74. The GCM total in Oregon was 909 in 1957.

The Old Order Amish settlement established in 1895 at McMinnville remained small; in 1957 it had only 28 members. The other two Amish congregations in the state were classified as Beachy Amish: Harrisburg (1911), with 96 members, a Sleeping Preacher group congregation, and Pleasant Valley at Yoncalla, with 23 members.

The Salem Deaconess Home and Hospital was established in 1917 under the auspices of the General Conference, Evangelical Mennonite Brethren, and Mennonite Brethren congregations in the area, but in 1949 it was transformed into a community hospital called Salem Memorial Hospital. 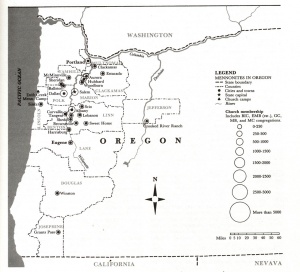 Oregon had approximately 4,545 Mennonites in 1986. Most of Oregon's people, including Mennonites, live in the Willamette Valley, which extends a distance of 100 mi. (160 km.) south of Portland and has a breadth of 40 mi. (65 km.) west to east. Oregon's first Mennonites traveled by train to California, then by boat to Oregon, until transcontinental rail service reached Oregon in 1883. Some settled on government homestead land; many purchased or rented already cleared farmland. The first Mennonites settled in Oregon in 1876, and by 1880 ministers served congregations of Old Order Amish near Hubbard and Swiss Mennonites near Silverton. Temporary Amish Mennonite congregations organized in the next decade. In 1890 the Waldo Hills/Emmanuel (General Conference Mennonite) congregation organized at Pratum, east of Salem, but in 1984 it withdrew from Mennonite affiliation. In 1986 Oregon's oldest existing Mennonite congregation was Zion (Mennonite Church) at Hubbard, organized in 1893.

Campbell, Lee Price. "Seventy-Five Years on the Shore of the Peaceful Sea; A History of the Pacific District Conference of the General Conference Mennonite Church of North America." MDiv thesis, Western Evangelical Seminary, Portland, OR 1973: 31-36, 55-73.