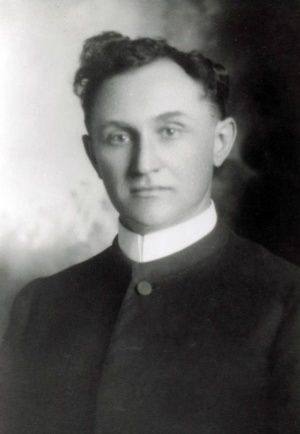 John Denlinger Charles, a prominent Mennonite Church (MC) educator, was born in Lancaster County, Pennsylvania, in Washington Boro, 29 June 1878 of Swiss background, to John Funk and Annie Denlinger Charles. He was the second in a family of two boys. His education began in the local grade school known as Harmony Hall, progressed through the state normal school at Millersville, Pennsylvania (class of 1899), Franklin and Marshall College, Lancaster, Pennsylvania (BA, 1905), and Columbia University, New York (MA, 1914).

On 3 May 1906 he married Amelia (née) Charles and moved to Kansas City, Kansas, to become superintendent of the Mennonite mission there, serving 1906-1909. He was called from this position in 1909 to be a member of the first faculty of Hesston Academy and Bible School, then being founded at Hesston, Kansas. He served in that capacity and later also as dean and registrar, the remainder of his life. Five children were born into the family—Irvin, Anna, John, Stanley, and Harold.

Charles united with the church at the age of 18 (1896) and was ordained to the ministry 4 May 1908. He served as minister to the Hesston congregation during the fourteen years of his life there and in many other positions of trust in the church: as Sunday-school field secretary, as chairman of the Mennonite Church General Conference Committee on Fundamentals, as secretary of the committee for revision of Bible Doctrine, as a member of the General Music Committee, and at the time of his death he also was secretary of the district mission board (Gospel Herald, 7 September 1923). His last illness interrupted an evangelistic tour of the Pacific coast states in July 1923. He died on 30 August 1923. Among his writings two books are recorded: Fallacies of Evolution (1917), and Present Day Religions (1921), both published by the Mennonite Publishing House, Scottdale, Pennsylvania.