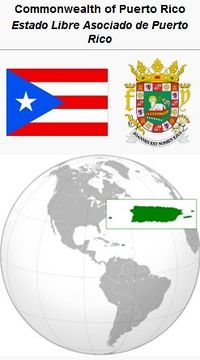 The Commonwealth of Puerto Rico is an unincorporated territory of the United States, located in the northeastern Caribbean Sea, east of the Dominican Republic and west of the Virgin Islands. The total area of Puerto Rico is 9,104 km2 (3,515 square miles).

Puerto Rico, an island about 100 miles (165 km) long and 35 miles (55 km) wide, is the smallest of the four Greater Antilles (Cuba, Jamaica, and Hispaniola). San Juan, the capital of Puerto Rico, is 1,600 miles southeast of New York City, and 1,000 miles southeast of Miami. The island's 3,435 square miles of land surface supported a population of 2,276,000 in 1957 or a density of 663 persons per square mile, with a 10 person per square mile increase each year in 1957. The island was discovered by Columbus in 1493, and remained a Spanish colony for 400 years. It was ceded to the United States in 1898 following the Spanish American War, and in 1952 became an American commonwealth with almost complete self-government. Puerto Rico has a subtropical climate; its chief agricultural products in the 1950s were sugar cane, tobacco, and coffee. Puerto Rican culture was more Spanish than American, though Spanish customs have been modified considerably by American influence. During a ten-year period after World War II Puerto Rico intensified its industrial economy. More than 400 American industries entered Puerto Rico, changing the economy from an agricultural to an industrial one. The average family income increased from $660 in 1940 to $2,400 in 1956.

Mennonite interest began in 1943, when the Mennonite Central Committee responded to an invitation of the Brethren Service Committee to establish a Civilian Public Service medical and social service program in the La Plata Valley. The Brethren CPS unit was begun at Castaner in August 1942, after the door was closed to CPS men in foreign countries. The MCC service program included medical, recreational and educational, and agricultural service. In January 1950 the MCC service program was transferred to the Mennonite Relief Committee, an agency of the Mennonite Board of Missions and Charities (Mennonite Church), which had begun evangelistic work at Pulguillas in December 1945. In 1947 a Mennonite (MC) church was also organized at La Plata.

The Mennonite program in Puerto Rico in the 1950s included a service and evangelistic program administered by the Mennonite Board of Missions and Charities. The service and evangelistic programs were merged into one administration on 1 April 1958. MRSC continued to supply personnel to assist with the service aspects of the church program in Puerto Rico. Included in the program were a 32-bed modern hospital in Aibonito and a number of medical clinics in rural communities, a community agricultural program and a community center program in La Plata. There were eleven congregations and outstations and an elementary and junior high school. There was also a language school and the Spanish radio (see Radio Broadcasting) program. The total church membership was 339 in 1957 with an active Sunday school and summer Bible school. The Bethany Mennonite School (Escuela Menonita Betania), with grades one to nine, at Pulguillas had an enrollment of 165 in 1957. Approximately 65 American Mennonite workers were engaged in the service and evangelistic program in Puerto Rico. A number of other Mennonite workers were also serving in Puerto Rico with the Ulrich Foundation, a Mennonite service agency with headquarters in Roanoke, Illinois. -- Justus G. Holsinger

The Convención Iglesias Evangélicas Menonitas de Puerto Rico (Puerto Rican Mennonite Conference) was organized in 1955 for fellowship, unity, evangelization, and service. It originated in the work of Civilian Public Service (1943) and of the Mennonite Board of Missions (Mennonite Church) starting in 1945. Most churches were located between San Juan in the north and Ponce in the south. An executive committee, served by the executive secretary, carried out the decisions of conference delegates to an annual assembly.

During the 1950s Mennonite Board of Missions (MBM) sponsored 55 persons in Puerto Rico to support and plant churches and institutions. Most were from rural backgrounds, but in the 1950s workers planted most churches in towns. The Mennonite Bible Institute trained young Christians who later became leaders. Institutions established in the 1940s—the Mennonite Hospital at Aibonito, the Betania Mennonite Academy, and Luz y Verdad (Light and Truth) radio program—were rooted more firmly in the church, and Mennonite Voluntary Service provided personnel, 1950-1984. The conference grew to 425 members by 1960.

In the 1960s the church planted its first urban churches (San Juan and Bayamon). The Bible Institute, now an extension program (theological education by extension), provided training of pastors and other members. Puerto Rican leaders tentatively began to shape the life of the church, although missionary models still dominated. By 1970 the conference had 660 members and 13 congregations.

In the 1970s the church continued to move toward coastal cities while experiencing disconcerting situations: social-political changes and an economic depression; the emigration of some church leaders; increasing varieties of church piety and practice; the exit of most missionaries and voluntary service personnel; and adjustment to new leadership styles. By 1980 the conference had about 950 members in 17 congregations.

Since then the church has worked to forge a common identity; evaluate its relation with MBM and the Mennonite Church (MC); train current and potential leaders effectively; relate wisely with Mennonites in the Caribbean and Central America, and with other denominations; reshape its peace witness; affirm national leadership and assimilate leaders trained in other Christian traditions; and disciple new members and retain current members.

In 1986 the conference had 893 members in 16 congregations, ranging from 9 to 137 members. The average age of the congregations was 23 years. Half of the members were in rural churches, the rest in towns and cities.

In the early 1980s the Southeastern Mennonite Conference began mission work in Puerto Rico. In 2020 missionaries worked at two locations. The Seguidores de Christo (Followers of Christ) congregation was in Anasco, on the western side of the island. On the northern edge of Puerto Rico was the Fuente de Vida (Fountain of Life) congregation in the town of Barceloneta.

In the 1990s the Puerto Rican Mennonite Conference (Convención de las Iglesias Evangelicas Menonitas de Puerto Rico: CIEMPR) was also shaken by continual internal divisions. One of the .causes of these divisions was the Pentecostal character of some of the churches. The Pentecostally-influenced Mennonite churches in Arecibo and El Buen Pastor church in Hatillo decided to separate from CIEMPR and formed the Evangelical Mennonite Mission of the Caribbean, Inc. (Misión Evangélica Menonita del Caribe, Inc.).

In 2020 the following Anabaptist groups were active in Puerto Rico:

The Power of the Gospel in a Changing World, Mission Board Report, 1954.