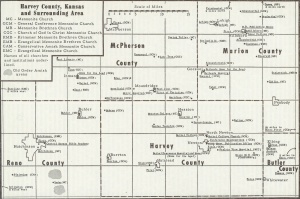 The early history of the county is closely con­nected with the Santa Fe Railroad which by July 1871 had pushed its tracks as far west as Newton, which was named after Newton, Massachusetts, a suburb of Boston, where many of the stockholders of the Santa Fe lived. For a number of years Newton marked the northern end of the Texas cattle trail, known as the Chisholm trail, and was the toughest cow town on the frontier. A number of other towns were laid out along the Santa Fe tracks - Walton in December 1871, Halstead in the spring of 1873, and Burrton in the summer of 1873. In addition to these, Harvey County presently includes the towns of Sedgwick, Hesston, and the villages of Zimmerdale, Patterson, Annelly, McLain, and North Newton. The bill which formed 13 town­ships into Harvey County (there were 15 townships in the county in the 1950s) was passed by the Kansas State Legislature and became law on 29 February 1872. The county was named in honor of James M. Harvey, governor of Kansas at the time.

The Santa Fe Railroad and the towns of Peabody, Newton, and Halstead are closely associated with the coming of the Russian Mennonites in the great migration of 1873-75 and in later migrations. The region was then the frontier, with the Santa Fe owning alternate sections of land, most of which had not been touched by plow. The Mennonites came by rail to either Peabody, Newton, or Halstead and thence settled in the region north of Newton, between the Arkansas and Cottonwood rivers, in the counties of Marion, McPherson, and Harvey. The Santa Fe sold thousands of acres of land to the Mennonites, assisted them by erecting immigrant houses in numerous places, and brought carload after carload of implements and other sup­plies to Peabody, Newton, and Halstead, where they were purchased by the Mennonites. One hardware store in Newton, for example, established a national retail record for the number of plows sold in one year, and some years later sold over 200 binders in a single season.

Harvey County in 1953 had a population of about 23,000 (of whom over 12,500 were living in Newton) with a Mennonite population of prob­ably 5-6,000. It is located somewhat to the south­ east of the geographic center of the state in the heart of a rich farming area. The land is rela­tively flat, and climatic and soil conditions are specially suited for wheat and other small grains. The Mennonites, particularly Bernhard Warkentin, are credited with introducing Turkey Red hard winter wheat to Kansas. Warkentin, who visited the region in 1871 and selected a site at Halstead, where in 1873 he established the first mill in the county, encouraged wheat production by securing several thousand bushels of seed in South Russia and shipping it to Newton, where it was distrib­uted among the early settlers. The Santa Fe Rail­ road gave the new grain a boost by making mar­kets accessible, and wheat raising quickly spread from the central counties to all sections of Kansas, Oklahoma, and Nebraska.