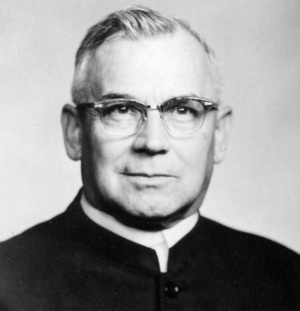 Paul Erb was born 26 April 1894 near Newton, Kansas and died at Mount Pleasant, Pennsylvania on 7 May 1984. During his 90 years he provided a wide variety of services for the Mennonite Church (MC). His principal contributions were as educator and editor, but he also served as pastor and church administrator. His graduate training was in English.

Paul married Alta Mae Eby in 1917; they had two children: Winifred (Erb) Paul and Delbert. Paul Erb was ordained to the ministry in 1919 and served as part-time pastor in addition to his teaching and editorial duties.

In addition to his inside work as teacher and dean, Paul had inadvertently prepared for the Gospel Herald work by extensive travel among Mennonite congregations on behalf of Hesston College. He was also a member of the Mennonite Commission for Christian Education and Young People's Work, 1937-1951, and was a leader in the movement to organize Mennonite Youth Fellowship in 1948.

Although he raised editorial writing to a new height, he continued extensive activity outside the office. He became the first executive secretary of the Mennonite Church (MC) General Conference (1958-1961) and, after retirement, served as field worker for Allegheny Mennonite Conference, 1966-1969. Then he taught English at Eastern Mennonite College, 1969-1971 and part-time in 1973.

His books include The Alpha and the Omega (1955); Don't Park Here, editorials reprinted from the Gospel Herald (1962); We Believe (1969); Orie O. Miller (1969); South Central Frontiers (1974); Bible Prophecy: Questions and Answers (1978). Among these the most important was The Alpha and the Omega, the Conrad Grebel lectures for 1955. This was an attempt to fashion a mediating position between premillennialism and amillennialism in an effort to overcome disagreement on this issue within the Mennonite Church.

Warkentin, A. and Melvin Gingerich, compilers. Who's Who Among the Mennonites. North Newton, KS: Bethel College, 1943 : 60.