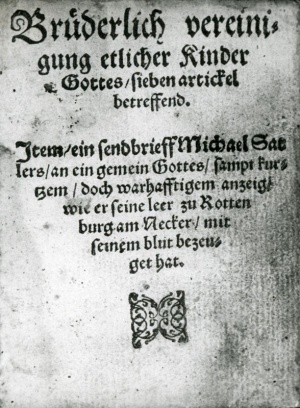 The first known Swiss Brethren or Anabaptist confession of faith was entitled Brüderlich Vereinigung etzlicher Kinder Gottes sieben Artikel betreffend ...("Brotherly Union of a Number of Children of God Concerning Seven Articles"). It was drawn up at Schlatten (dialect for Schleitheim), canton of Schaffhausen, Switzerland, on St. Matthias Day, 24 February 1527. The author was almost certainly Michael Sattler; this is evident from the reference to "our assembly, and . . . that which was resolved on therein" in a pastoral letter of Sattler, as well as from a reference in a letter from 50 Swiss Brethren elders to Menno Simons which mentions a brother in whose house the "verdragh (agreement) of Michael Sattler" had been made.

The confession treats of seven topics: baptism, excommunication, the Lord's Supper, separation from the world, shepherds, nonresistance, and the oath. Each of these subjects is discussed briefly and clearly, and is based on the Word of God. Baptism is made a symbol of Christian faith and of one's intention to live a life united with Christ in His death and resurrection. Those who twice refuse private admonition shall on the third occasion be excommunicated from the brotherhood because of their life of sin. Only those can be admitted to the Lord's table who have been united beforehand by Christian baptism and by a common separation from sin. The child of God is called upon by Christ to withdraw from every institution and person which is not truly Christian. Only one church officer is mentioned, the Hirt (shepherd, pastor) whose duties were to read, admonish, teach, warn, discipline, excommunicate, to lead in prayer, to administer the Lord's Supper, and to undertake the general oversight of the congregation. The child of God is to follow absolutely the law of love as taught by the New Testament, and leave the worldly sword to the officers of the state as ordained by God. Oaths are held to be inconsistent for finite creatures, and forbidden for the Christian by the express commands of Scripture. The Schleitheim confession does not give a complete summary of Christian faith, but treats only of the unique emphases of the evangelical Anabaptists of that era or perhaps of the points which were particularly challenged, either by the opponents or by erring brethren within.

The following four editions were known in the 1950s: 1533 (reprinted by Walther Köhler in 1908 as Heft 3 of Band 2, Flugschriften aus den ersten Jahren der Reformation together with valuable introduction); a contemporary but undated edition (reprinted by Heinrich Böhmer in Urkunden zur Geschichte des Bauernkrieges und der Wiedertäufer, Bonn, 1910, 2d and 3d ed. in 1921 and 1933) ; a later undated edition of the mid-16th century, unique copy in Mennonite Historical Library at Goshen College; and an edition of 1686 bound with Christliches Glaubensbekantnus. An English translation of the 1533 edition by J. C. Wenger in Mennonite Quarterly Review, 1945, 247-253. Each of the German prints appears together with other items in a single booklet. John Horsch published an English translation in Gospel Herald (1938) and the German text in the Menn. Rundschau (1912). The English text given by W. J. McGlothlin in Baptist Confessions of Faith (Philadelphia, 1911) 3-9 is a translation of the inadequate Latin form of the articles as given by Zwingli in the Elenchus of 1527, which is a translation from a German manuscript copy. Contemporary manuscript copies are in the Heidelberg University Library, Bern Staatsarchiv, and three formerly in Bratislava, Czechoslovakia. Dutch editions appeared in 1560 and 1565 (reprinted by Samuel Cramer in BRN V (1909) 585-613. Beck had published one of the Bratislava copies in his Geschichts-Bücher (1883). Ernst Müller published the Bern copy in his Berner Täufer (1895), and Beatrice Jenny published it (1951) in full in a critical edition. A lost French translation was used by Calvin in his attack against the Anabaptists of 1544 (Brieve Instruction), in which he specifically refutes the confession point by point. -- J. C. Wenger

The Schleitheim Confession (also known as the Brüderliche Vereinigung or the Schleitheim Brotherly Union) has come to be recognized as a watershed articulation of certain Swiss Anabaptist distinctives. Michael Sattler is now accepted as being the primary author of the seven articles. These were ratified on 24 February 1527 during an assembly of Anabaptists in the northern Swiss village of Schleitheim.

The significance of the Brotherly Union was evident immediately: The articles were copied and circulated quickly and extensively in the Swiss and South German Anabaptist communities. Reaction within those communities was not exclusively positive. Some of the articles were contested within Anabaptist circles (e.g., article 6 by Balthasar Hubmaier); Ulrich Zwingli and John Calvin wrote refutations of the confession as a whole.

While Schleitheim's immediate influence on the Anabaptism of the Swiss and South German areas is undeniable, the historical connections linking Schleitheim to the later confessional tradition have yet to be clarified. Schleitheim's teaching on the sword and the oath (articles 6 and 7) became increasingly normative in the Mennonite and Hutterite traditions, but the articles themselves seem not to have been preserved in a confessional sense: there is no obvious direct line of descent from Schleitheim to the later Mennonite confessions such as Dordrecht. The Schleitheim Confession has received significant denominational attention again only following its recovery in the modern period, with particular attention paid to Schleitheim's teaching on the sword.

Some scholarly difference of opinion exists concerning Schleitheim's historical status as a confessional delineator: was it directed primarily against the Protestant reformers, and that only after Bucer and Capito rejected the ecumenical overtures of Michael Sattler? Or was Schleitheim a further development of prior sectarian impulses, and directed primarily to the Anabaptist community? Some historians have noted further that although Schleitheim explicitly rejects social rebellion, it also preserves important demands first enunciated in the Peasants' War of 1525. -- C. Arnold Snyder

Harder, Leland. "Zwingli's Reaction to the Schleitheim Confession of Faith of the Anabaptists." Sixteenth Century Journal 11 (1980): 51-66.

Snyder, C. Arnold. "The Schleitheim Articles in Light of the Revolution of the Common Man: Continuation or Departure?" Sixteenth Century Journal 16 (1985): 419-430.

Text of the Schleitheim Confession