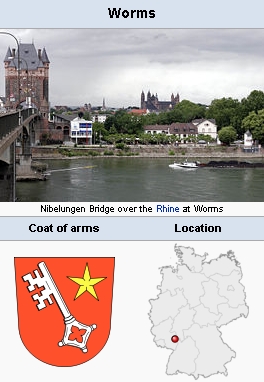 Worms, a town on the Rhine in the Palatinate, Ger­many (population 56,500 in 1953; 82,212 in 2006; coordinates: 49° 37′ 55″ N, 8° 21′ 55″ E), was in 1527 a center of Anabaptist activity. In January 1527 both Hans Denck and Ludwig Haetzer came to Worms, where they completed and published their translation of the Old Testament Prophets (see Worms Prophets). There was probably no Anabap­tist congregation in this town before 1527. The rise of the Worms Anabaptist movement may have been the result of the work of Melchior Rinck, Haetzer, and particularly Denck, though Fellmann is of the opinion that Denck was not especially active here, leading a retired life. In any case it is clear that Denck deeply influenced Jacob Kautz, one of the Reformed preachers at Worms, who even before the coming of Denck and Haetzer opposed infant baptism. Kautz was won over for the Anabaptist principles; among his converts was his co-preacher Hilarius, who in turn con­verted many others. The clergy and the city gov­ernment at this time lived in a kind of vacuum between Catholicism and Reformation and did not seriously counteract Anabaptist activity.