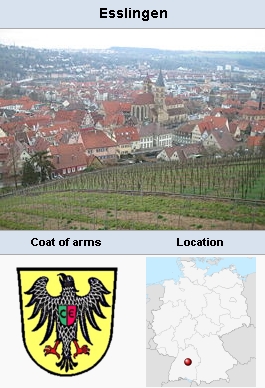 Esslingen, a city (population of 70,000 in 1950, 92,299 in 2004) in Baden-Württemberg, situated on the Neckar, six miles east of Stuttgart (coordinates: 48° 44′ 0″ N, 9° 19′ 0″ E), from 1209 to 1802 a free imperial city, in which Anabaptism early found many adherents, with some protection from the nobility. The name has survived in the “Wiedertäufer-Klinge,” a forest ravine where they were accustomed to assemble. As early as 1527 there was an Anabaptist congregation here, which prepared the ground for the introduction of the Reformation (see Ambrosius Blaurer), but also suffered severe persecution. Its leaders were the knifesmith Hans Krafft of Augsburg, and the cobbler Felix Pfudler of Esslingen, Zuberhans of Hegensberg, Stephan Böhmerle, and others. The number of members soon increased to 100. Esslingen was at this time a place of refuge for the Anabaptists; Hans Leupold (Hege, 45), Leonhard Eleutherobius (Freisleben), and others spent some time here. Several of the Anabaptists imprisoned in the dungeon at Passau stated that they had been baptized at Esslingen, that Lienhard Wenig, a vinedresser, was their elder, and other prominent Anabaptists were Martin Arnold and Paul Frank of Hainbach (Nicoladoni, 188 ff.). Expelled early in 1528, they immigrated to Reutlingen under the leadership of the guild master Leonhard Lutz (Hege, 45). Stephan Böhmerle returned, and was executed on 5 October 1529, as the first martyr of Esslingen.

The city council of Esslingen had issued a warning, 10 November 1527, against the “deceitful seduction of Anabaptism,” but did not take steps of suppression until the Austrian government at Stuttgart reminded the councilors of its presence in the city. Many men and women were arrested and by torture compelled to make confessions as follows: their faith they based alone on the Scriptures; faith must precede baptism; communion is a commemoration of the death of Christ; bearing arms is forbidden, nor may one do battle against one’s enemy, be he Jew or Turk; peace and unity must be preserved; and it is a duty to obey all reasonable commands of the government. If several said that all who refused baptism should be killed as unbelievers, and that they were awaiting the coming of aid from Moravia where there were many of their faith, it is clear that either their statements were misunderstood or were extorted by torture, for there can be no thought of murder in connection with the Hutterian Brethren (Pfaff, 473). Nevertheless it may be correct that some required community of goods and asserted that Christ was not God, but a prophet and a sinless man, like any other; for all who do God’s will are His sons. The contemporary chronicler, Dyonisius Dreytwein (born about 1500 in Esslingen), makes an interesting statement at the conclusion of a comparison of the different creeds, “Therefore the Anabaptists are still the best and most pious; they do not swear, they do not practice usury, they do not drink to excess, as thou, miserable crowd” (p. 97).

Six of the arrested Anabaptists recanted and were released with a fine of 10 to 30 pounds; the others were banished. Stephan Böhmerle, who returned, was beheaded on 5 October 1529. In 1530 Joachim Fleiner and Ludwig Lichtenstein met the same fate, as well as Bastian Egen and Jakob Schneider of Uhlbach.

When, in 1531, the Reformation was carried out in Esslingen, a more lenient attitude was taken toward the Anabaptists. Ambrosius Blaurer, the Swabian reformer who arrived in Esslingen in 1531, won most of the Anabaptists by the earnestness of his preaching and by personal contacts. But when he left in the following year a bitter quarrel which broke out among the clergy caused the Anabaptists to leave the church again. They also took offense at the manner of life of many members and the lack of church discipline which Blaurer had introduced at their instigation. Thus, the serious-minded returned to the Anabaptists, and new repressive measures were initiated by the clergy. The Zuchtordnung of 1532 provided that anyone who rejected infant baptism and was rebaptized, should be admonished by the preachers, and if he did not desist from his error he should be imprisoned, and if he still persisted, expelled. On 4 February 1532, the Anabaptists were summoned to the Rathaus, to be cross-examined by the clergy. Oddly, they confessed that they held the doctrine of the sleep of the soul (Pfaff, 47). In February 1533 a new examination was ordered, at which three Anabaptists were compelled to recant publicly. Following an opinion given by the Esslingen clergy, all meetings of the Anabaptists were forbidden. But the order was not enforced.

On 5 April 1534, an Anabaptist meeting in the region of Esslingen was surprised, which was attended chiefly by Anabaptists from Württemberg. A list of persons who had harbored Anabaptists was found and sent to Stuttgart. In the following year Anabaptists again appeared in Esslingen. On 23 August 1535, Duke Ulrich of Württemberg wrote to the Esslingen authorities, urging them to suppress the “false doctrine of the Anabaptists.” But nothing was done. In 1541 the clergy of Esslingen complained that for years the Anabaptists in the small parishes had so corrupted the populace that few acknowledged the pastors as the true preachers. On 29 June 1544, the council of Esslingen commanded the parishes to show more respect for the clergy, and arrested three men and women on a suspicion of Anabaptism. At their trial they said that the taking of interest is wrong; no one is condemned for original sin; infant baptism is useless; preaching is an aid to salvation if it is rightly done; but because it is not, it bears no fruit and reforms nobody. Veit Bechtold said Christ was true man and God, born of Mary, but crafty arguing about it should be avoided. They were dismissed with a serious warning.

In 1551 several Anabaptists of Hainbach were again arrested for holding meetings contrary to the order of the council. One of them, Gerhard Feygenbutz, declared that faith must precede baptism; he could not swear, but would otherwise conduct himself like any other citizen and do twice as much as one. They were dismissed with the warning that if they did not desist from their error their goods would be confiscated.

Duke Christoph of Württemberg in 1558 requested that the Esslingen authorities watch the Anabaptists, who were meeting in the outskirts of the city, and in 1560 he wrote them that the sectarians were meeting in a forest between Hainbach and Rüdern; this mischief should be stopped. An investigation revealed that the Anabaptists were particularly numerous and were increasing in Möhringen. After some lenient measures the council issued a sharp decree against Möhringen and Vaihingen, warning all of the ungodly error of Anabaptism, and threatening any who sheltered them with confiscation of property, corporal punishment, and exile.

On 6 June 1562, 28 Anabaptists, most of them from Württemberg, were seized in a ravine at Katzenbühl not far from Hainbach, where they had frequently assembled. When they obstinately refused to recant they were expelled from the region of the city. Again in 1564 several Anabaptists were banished. In 1567 Jakob Andreae preached eight sermons against the Anabaptists, which he published in 1568, and which influenced the governments again and again to proceed against the Anabaptists. Repeatedly the dukes of Württemberg, Ludwig and Friedrich, accused the council of Esslingen of tolerating Anabaptists. In 1598 several Anabaptists were again arrested. Some of them said they held their meetings in the woods near Stetten, and one of them justified their meetings on the grounds that the apostles had also done so. Most of them recanted, and the rest were banished. In 1609 Duke John Frederick warned the council of Esslingen of Anabaptists who had reputedly come to Hainbach and were trying to win converts. The council, however, replied that in the last three or four years, since Walter Lichtenstein had left Hainbach, there were no Anabaptists there. Nothing is known of their presence there since that date.