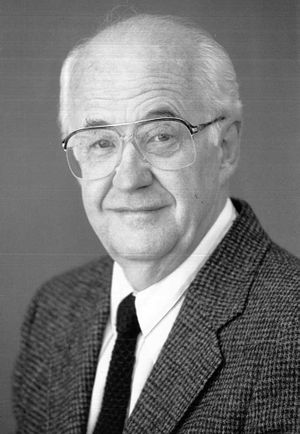 John Stanley Oyer: Anabaptist scholar and editor, was born 5 January 1925 in Hesston, Kansas, USA to Noah Oyer (11 April 1891-25 February 1930) and Siddie King Oyer (30 October 1884-7 March 1963); he was the youngest child and only son among three children. His older sister, Mary, became a well-known musicologist. John grew in close association to Goshen College, Goshen, Indiana where his father served for a period of time as dean. In the summer of 1943, following a year of study at the college, John Oyer was drafted and spent the next seven years in Civilian Public Service and relief work in Europe. On 3 July 1949 he married Carol Schertz (31 December 1925- ), a relief worker from Illinois whom he had learned to know in Goshen. They had three daughters and one son. John Oyer died 4 May 1998 in Goshen, Indiana. He is buried in the Violett Cemetery in Goshen. After John’s death, on 1 January 2001, Carol married Art Smucker, a former colleague of John’s at Goshen College.

In 1951, after finishing his BA at Goshen College, Oyer embarked on a master's program in history at Harvard, where he brought to his studies fresh memories of European cities smoldering in ashes and a keen awareness of the fragility of human civilization. This profoundly shaped his historical studies and his teaching. In his University of Chicago doctoral dissertation, for example, later published as Lutheran Reformers Against the Anabaptists (Nijhoff, 1964), Oyer recognized in the angry Lutheran polemics against the Anabaptists a deeper concern to preserve order in a society seemingly on the verge of chaos. And in his careful studies of Anabaptist martyrdom, he painstakingly sought to interpret the worldview, not only of the heroic martyr, but of the executioner and the Anabaptist recanter as well.

In the fall of 1955 Oyer began teaching in the Goshen College history department, a vocation that would continue for the next 38 years, interrupted only by several sabbatical leaves spent doing research in Europe. Appreciative students remember Oyer as a gifted lecturer who took an aesthetic delight in precise language, the carefully-framed sentence and the aptly-chosen story.

Oyer was best-known internationally as the editor of Mennonite Quarterly Review (MQR) (1966-74 and 1977-92) and as a scholar of sixteenth-century Anabaptism. He also served as the director of the Mennonite Historical Library from 1975 to 1987.

During his 25-year tenure as editor of MQR, Oyer broadened the journal's inter-disciplinary scope and moved it beyond the self-affirming tone characteristic of the "Bender school" by opening pages to a new generation of scholars, even though their findings were occasionally critical of traditional Mennonite historiography. Throughout his career, Oyer's academic friendships always extended well beyond North American or Mennonite circles.

Later in life, he collaborated with Robert Kreider in writing The Mirror of the Martyrs (Good Books, 1990). The book highlighted his efforts, along with Kreider, to purchase 23 of the original copper plates etched by Dutch artist Jan Luiken to illustrate the 1685 edition of the Martyrs' Mirror. The plates eventually became the centerpiece of a traveling exhibit on Anabaptist martyrdom aimed at a popular audience.

John S. Oyer was intensely curious about every aspect of life. He loved art, music, languages and the beauty of the natural world. To all of his later work as a teacher, editor and scholar, he brought an empathetic and irenic spirit, always seeking to understand the world from perspectives other than his own.

Books by and about John S. Oyer

Wenger, J. C. They met God : a number of conversion accounts and personal testimonies of God's presence and leading in the lives of his children. Scottdale, PA. : Herald Press, 1964. Includes a chapter by John S. Oyer.

Loewen, Harry, ed. Why I am a Mennonite : essays on Mennonite identity. Scottdale, Pa. : Herald Press, 1988. Includes a chapter by John S. Oyer.

Oyer, John S. They harry the good people out of the land : essays on the persecution, survival and flourishing of Anabaptists and Mennonites. Goshen, Ind. : Mennonite Historical Society, 2000.