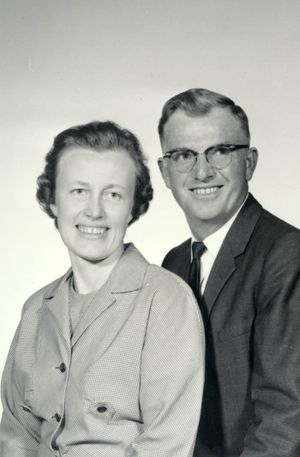 Malcolm and Esther Wenger lived on the Northern Cheyenne Reservation in Montana from 16 March 1944 to 17 August 1966. They pastored small churches and worked to develop tribal leadership in Busby, Lame Deer, and Birney. Malcolm became conversant in the Cheyenne language and often preached in Cheyenne. Malcolm also worked to translate the Bible and various hymns and songs into Cheyenne. He studied linguistics before and during his career in Montana at various institutes.

Following their work in Montana, the Wengers moved to Newton, Kansas to work for the General Conference Mennonite Church as the Secretary for Indian Ministries for the Commission on Home Ministries. In 1972 Malcolm was also designated Associate Secretary for Evangelism and worked with the Key ’73 program. In addition, he worked half-time as Northern District Conference minister from 1969 until mid-1972.

In 1978 Malcolm Wenger urged the conference to replace him with a native American. The Wengers mission work took them next to Canada, where he served as the Executive Secretary for the Conference of Mennonites in Canada's Native Ministries program from 1979 to 1981. He also pastored a Mennonite congregation serving Metis and First Nations people. In retirement the Wengers settled in Newton, Kansas and joined Shalom Mennonite Church. They continued their service with visits to and short term leadership roles in Oklahoma, Arizona, Montana, and other mission fields.

Esther Boehr was born on 1 April 1922 in Wisner, Nebraska to Henry Boehr (24 February 1885-1 January 1980) and Elizabeth Wiebe Boehr (18 May 1888-17 September 1967). She attended Salem Mennonite Church. Esther graduated from Wisner High School in 1939 and obtained a teaching certificate after two years at Bethel College. She taught in a rural school near Goessel, Kansas, for two years before her marriage and move to Montana.

Esther was an active member and deacon at Faith Mennonite Church while they resided in Newton during the late 1960s and 1970s. When they returned to Newton after serving in Canada the Wengers were founding members of Shalom Mennonite Church. The Wengers moved to Kidron Bethel Village in 1999.

In their memoir, Malcom and Esther said they owed much "to the Tsetsastase, the Cheyenne people, who became our friends, and from who we learned so much."