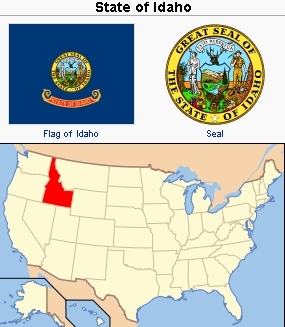 Idaho is a state in the northwestern region of the United States of America. The total region of the state is 83,570 square miles (216,632 square km.). The states of Washington and Oregon are to the west, Nevada and Utah are to the south, Montana and Wyoming are to the east, and the Canadian province of British Columbia is to the north. The landscape is rugged with some of the largest unspoiled natural areas in the United States. The estimated total population in 2012 was 1,595,728.

American Indian tribes predominant in the area in historic times included the Nez Perce and the Coeur d'Alene in the north, and the Northern and Western Shoshone and Bannock peoples in the south. The American explorers Lewis and Clark entered present-day Idaho in 1805. Fur traders from both the United States and Canada soon followed. Idaho was part of an unorganized territory known as Oregon Country, claimed by both the United States and Great Britain. The Oregon Treaty of 1846 established United States jurisdiction over the area, and what is now Idaho became part of the Oregon Territory. In 1853 what is now Idaho was split in two between the Oregon Territory and the newly created Washington Territory, but in 1859 the two halves were reunited. The Idaho Territory was created in 1863 and assumed the boundaries of the modern state in 1868. Idaho became a state in 1890.

In 2008 the religious affiliation of Idahoans was: Church of Jesus Christ of Latter-day Saints 23%; Evangelical Protestant 22%; Catholic 18%; Unaffiliated 18%; Mainline Protestant 16%; Other Faiths 2%.

Less than 20 miles from the state capital of Boise, the first Mennonite settlement was begun in February 1899 by David Garber, and the Nampa Mennonite (MC) Church was organized the same year. Two other congregations of this group were later established in Idaho; viz., Filer (1914), some 150 miles southeast, and Indian Cove (1935) near Hammett, some 150 miles south of Nampa. In 1955 these three congregations had a total of 369 members.

The General Conference Mennonites (GCM) first came to Idaho in 1906, when a settlement was established at Aberdeen, about 200 miles east of Nampa. They organized a congregation in 1907. A second church (Emmanuel), established by division in 1912, three miles south, merged again with the Aberdeen church in 1930. Two other settlements near Aberdeen, the Minidoka mixed settlement (partly GCM, partly Central Conference), and the Dubois settlement (1910-1912), both failed. One other GCM settlement, at Caldwell, five miles from Nampa, was founded in 1941; a congregation was organized in 1947. A third church was organized in Filer in 1955. The three GCM congregations in 1955 had a total of 389 members, Aberdeen alone having 327.

A United Missionary church was organized in Filer in 1905. In 1949 it had 69 members. For a short period a Mennonite Brethren church also existed at Aberdeen (founded 1910) and a Central Conference church at Nampa (founded 1907). The Mountain View congregation of the Church of God in Christ, Mennonite, near Bonners Ferry, at the extreme northern point near the Canadian border, was organized in 1936 and had 92 members in 1955.

Thus the total Mennonite membership in Idaho in 1955 was 790, distributed as follows: General Conference Mennonite 389, Mennonite Church 369, Church of God in Christ, Mennonite 92. The Idaho settlements were all pioneer farming communities, those in the south depending almost exclusively on irrigation, built by settlers of widely varying backgrounds. All were located in or near small towns except those at Nampa, which had over 51,000 inhabitants. The settlements were of mixed background. The Nampa Mennonite (MC) Church operated a city mission in Nampa and a Christian day school called Nampa Mennonite School. The Mennonites (GCM) of Aberdeen built the Salem Deaconess Hospital at American Falls but sold it to the county because of financial difficulties. (Mennonitisches Lexikon 2, 400 f.) -- H. N. Harder

Campbell, Lee Price. "Seventy-Five Years on the Shore of the Peaceful Sea: A History of the Pacific District Conference of the General Conference Mennonite Church of North America." M.Div. thesis, Western Evangelical Seminary, Portland, OR, 1973: 17-24, 73-78.