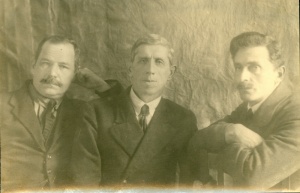 Verband der Bürger holländischer Herkunft (Asso­ciation of Citizens of Dutch Extraction) was origi­nally known as the Verband der Gemeinden und Gruppen des Süden Russlands, the word Gemeinden referring to villages rather than to congregations. On 19 February 1921, the church and civil leaders (rep­resentatives) of the Molotschna district in South Russia, including about 60 villages (besides three individual farms) covering a Mennonite population of about 28,000, met in the church at Alexanderwohl under the leadership of Elder Gerhard Plett of Hierschau, with the purpose of finding some basis on which the young men of the brotherhood in the new Soviet nation could maintain their non-resistant position. A committee consisting of B. B. Janz, chairman, Dietrich Richert, H. Bartel, and A. Fast was chosen to form an organization to deal with the government in carrying out this purpose. The legality of the organization and its civil rights had to be confirmed by a government charter. In Kharkov, the capital of the Ukraine, the word "Mennonite" caused some objection as a religious term, and had to be dropped after a hard struggle. Then the name above was adopted to cover the Mennonites of the Ukraine exclusively with their population of about 60,000, and was chartered in the spring of 1922. The entire constitution was later (about 1924) adopted into the laws of the nation because of a financial loan to the Association from Holland, in the hope of obtaining more such loans from other countries. For religious concerns anoth­er committee was later chosen, with Elder Jakob Rempel as chairman. The Mennonites living elsewhere in Russia, numbering 30,000-40,000, followed the example of those in the Ukraine and founded the All-Russian Mennonite Agricultural Union (AMLV), with Peter Froese and C. F. Klassen as leaders. Every year a congress of Mennonites was held in the Ukraine with the permission of the government and in later years with a representative of the gov­ernment present, to do the business of the Associa­tion and to elect the leadership. The most impor­tant activities of the Association concerned the eco­nomic welfare of the settlements, especially in cattle raising (the German Red cow), the trade of the co­operatives, the elimination of violence on the part of local Soviet officials, securing foreign loans, and also securing permission for the emigration of many Mennonite refugees (which, however, soon became general), at first to Paraguay, then to Canada. Per­mission for this emigration was secured on 22 April 1922, by the Association. Each Mennonite settle­ment in the Ukraine formed a local chapter of the central association. The most important of these were in Halbstadt, Gnadenfeld, Chortitza, Zagradovka, and Memrik, with other smaller groups. They were outstandingly successful economically. The first emigrant train with about 700 left Chortitza in June 1923, via Moscow, to Libava for em­barkation on a Canadian Pacific steamer.

Not a single communist was a member or an offi­cer in this association. It enjoyed the unquestioned confidence of all the Mennonites. In brief, the Association became the first link in the rescue of the Mennonites from Russia. It was able to function until 19 February 1926, the date of the last congress in Kharkov, where Janz resigned the leadership, and another committee was chosen, consisting of Her­mann Dück, Peter Funk, etc., all of whom, with Philipp Cornies, the young assistant of Janz for many years, were sent into exile soon after. Thus the Association was liquidated as a step in the de­cline of the Mennonite settlements, which were now without legal rights. Janz managed to secure his passage for escape from Russia immediately follow­ing the congress of 1926, and in the eleventh hour escaped to Canada in June 1926.