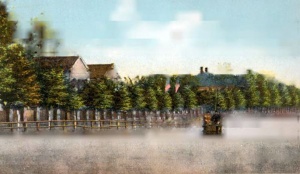 Halbstadt, a village and district of the Molotschna Mennonite settlement in South Russia (now Molochansk [Ukrainian: Молочанськ], Tokmak Raion, Zaporizhia Oblast, Ukraine; coordinates: 47.207222, 35.594722 [47° 12′ 26″ N, 35° 35′ 41″ E]), was founded in 1804 together with eight other villages by Men­nonites emigrating from Prussia and was named after a village in Prussia. Leaders were Klaas Wiens and David Hubert. Originally the village owned 3,829 acres of land or 21 full farms with 189 acres each; later 945 additional acres, or 25 small farms of 38 acres each were added. (A. Braun states that Halbstadt owned about 5,500 acres.) The impor­tance of the town within the Molotschna villages lay at first in the fact that it was made the seat of the district administration (1816) of the Mo­lotschna settlement.

Of the 60 Mennonite villages of the Molotschna settlement, Halbstadt had the largest number of industries. In the course of time there developed, in addition to the smaller shops, a cloth factory (1815-16), a brewery (1809), three vinegar fac­tories, two large steam-power mills, a starch factory, a barley mill, a motor factory, two tile factories, two oil presses, and the "Raduga" print shop. In connection with this growing industry, Neu-Halbstadt, an adjacent workers' settlement, was established in 1842.

Originally made up of only Mennonite families, Halbstadt gradually took in various elements of the population in consequence of the addition of factory workers and the Revolution. Even before the Revolution, non-Mennonites were in the ma­jority. After the Revolution it became difficult for the Mennonite minority to assert its social and cultural character. The total population was 1,455 in 1925, of whom 482 were Mennonites, 118 other Germans, 675 Ukrainians, 120 Russians, 19 Jews, and 41 Poles, Bulgarians, and Greeks.

Under the Soviets all industries of Halbstadt as well as the land were nationalized. The collectivization process and the antireligious policies caused the exile of many Mennonites. During the outbreak of hostilities between Russia and Germany in World War II many were evacuated to Siberia. Those remaining left Russia for Germany in a trek under German army escort in 1943. Many of the Halbstadt citizens who escaped from Russia after World Wars I and II have found new homes in Canada and South America. (See also Molotschna, Halbstadt Mennonite Church, and Ukraine)