The Memrik Mennonite Settlement, historically located in Bachmut district, Ekaterinoskv province (Dnipropetrovsk), Russia (Ukraine), (now located in the Donetsk Oblast [Ukrainian: Донецька область, Donets’ka oblast’]);, was founded in 1885 on the Volshya River, a tributary of the Samara, which in turn flows into the Dnieper. The settlement was located in the Don basin near the Catherine railroad, which connected it with the Sea of Azov. The next larger city was Yuzovka (later Stalino; still later Donetsk) some 20 miles (32 km) away. 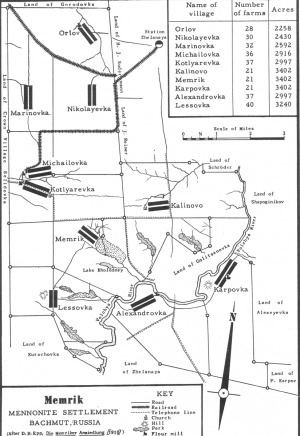 In 1914 the estimated property of the settlement (population of some 3,500) amounted to 11,145,000 rubles. During World War I some 240 young men were drafted into forestry and medical service. During the Revolution in 1918 Makhno and his bands inflicted great suffering on the settlement, murdering many inhabitants, and taking or destroying much property. During the struggle between the Soviet and White armies the Memrik settlement again suffered severely. Drought and starvation were severe. At last in 1922 some help came from America (Mennonite Central Committee). Conditions improved somewhat during the NEP period under the Soviets. Only some 30 families immigrated to Canada in 1923-1927. Very few managed to escape from Russia via Moscow in 1929.